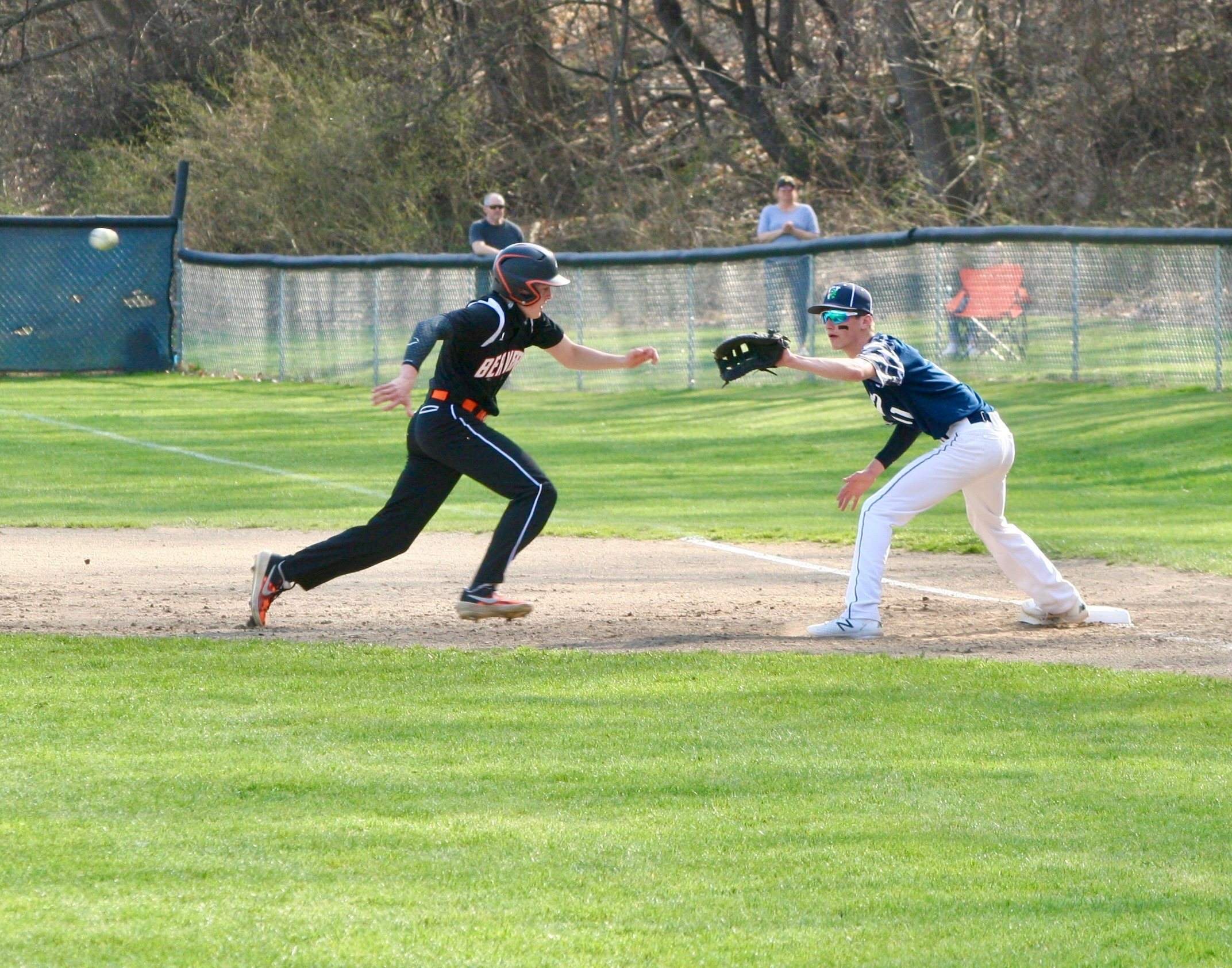 It was part of a three-RBI performance for Shick, as the Big Reds scored three runs in the bottom of the seventh to force extra innings.

Julian Trott drew a bases-loaded walk to get the Big Reds within two in the seventh and Eric Nehlen’s 2-run single tied the game at 8.

Conneaut jumped out to a 7-0 lead after the top of the second.

Anthony Burckhartte drove in a pair in the first inning and Alex Kennedy, Zack Rice, and Jake Wiley all drove in runs in the second inning.

West Middlesex scored four runs in the third thanks to RBIs from Derrick Zappa, Shick, Hunter Hoffman, and Trott.

Richie Preston got the win on the mound, striking out the side in the top half of the eighth.

Teconchuk came in with the bases loaded and no outs in the seventh inning and Warren leading 6-3.

Teconchuk worked around a 1-out bloop single by Max Rimdzius, inducing three ground ball outs to give the Dragons the win.

Warren jumped out to a quick 3-0 lead in the first inning on RBI singles from James Swanson and Alex Borger and an RBI groundout off the bat of JT Blum.

Swanson had a big game, going 2-for-3 with an RBI, two runs scored, and three stolen bases on his way to Allegheny Grille of Foxburg Player of the Game honors.

Corry twice got to within 1 run in the fourth and fifth innings on RBI singles from Nate James and Lucas Dyne.

Micah Passmore went 2-for-4 with an RBI and Owen Blum came up with a big pinch-hit RBI single for the Dragons.

Logan Joncas and Nathan Lesher had two hits apiece for Corry, while Dyne drove in a pair.

Lesher started the game and went four innings for Corry, allowing four runs (one earned) and striking out five. Dyne came on in relief and allowed two runs in his two innings of work, striking out one.

The Blue Devils led 5-0 after the second inning and scored seven more runs in the third.

Jaden Grubbs went three innings on the mound for the Blue Devils, striking out six and allowing two hits. Bryce Kania gave up an unearned run, striking out a pair.

Brady Jardina went 2-for-3 with a pair of RBIs for Cambridge Springs.

Kyle Meyers had a pair of hits for Union City.

Merchbaker didn’t walk a batter, throwing 67 of his 94 pitches for strikes.

His only blemish was a home run to Landon Caldwell in the first inning.

The Cardinals struck for four runs in the third, two in the fourth, and three more in the fifth.

Merchbaker also had a triple at the plate, driving in a pair of runs, with Jaiben Walker also collecting a pair of RBIs.

Ethan Shoup reached base four times for Cochranton, collecting two hits, including a double and a pair of walks, scoring three times.

Wyatt Barzak had a hit, two runs scored, and an RBI. Caiden Dunmire also drove in a run for the Cardinals.

RUSSELL, Pa. – Owen Trumbull tossed a complete-game five-hitter, Zane Alexander drove in a pair of go-ahead runs and Jared Beers had three hits as Eisenhower improved to 3-0 with a 6-3 win over Rocky Grove.

The Knights actually trailed, 3-1 going into the bottom of the sixth, but scored five runs in the frame to take the lead.

Teagan Gray got the scoring in the inning started with an RBI double, followed by a run-scoring single from Kael Hunt to tie the game 3-3. Alexander followed with a 2-run single.

Trumbull capped the frame with an RBI single.

Trumbull then shut the door in the seventh with a strikeout, groundout and fly out.

The Eisenhower senior struck out five, walked two and threw 62 of his 98 pitches for strikes.

Reece Henderson was in control through the first five innings before running into trouble in the sixth. The Oriole junior allowed seven hits and five earned runs, striking out eight.

ERIE, Pa. – Cam Williamson had three hits, while Casey Smith drove in a pair of runs as Harbor Creek stayed unbeaten with a 10-0 blanking of Erie.

Casey Smith, along with his brother Cody and Austin Vaughn combined on the pitching duties, allowing just three hits while striking out 14.

Houston struck out six and didn’t walk a batter over his seven innings.

The Tigers struck for single runs in the third and fifth innings on a sacrifice fly from Sam DiStefano and an RBI single from Preston King.

Garrett Knapp had a strong outing on the mound for the Rockets, going six innings and giving up just a pair of unearned runs, striking out six without issuing a walk.

EDINBORO, Pa. – Four McDowell pitchers combined to strike out 15 batters, and Dan Snyder drove in a pair of runs as the Trojans beat General McLane, 7-1.

Jackson Hower doubled and drove in a run, while Dan Snyder also doubled.

McDowell scored three runs in the first inning and three more in the fourth.

For General McLane, Jaxson Scutchings was 2-for-3 at the plate.

Todd Essman helped lead a big day at the plate for the Yellow Jackets, going 2-for-3 with a double, two RBIs, and two runs scored.

Gabe Thomas had a pair of hits for Northwestern.

Thompson gave up just one unearned run, allowing two walks and striking out seven in the victory.

Colin McCune picked up the final two outs for the save.

Slippery Rock scored single runs in the first and second innings and put up a 2-spot in the fourth.

Thompson drove in a run for the Rockets, as did Walker Vogan, while Brett Galick had two hits and scored a pair of runs.

John Hake had a pair of scoreless innings for the Eagles. Isaac Criss went 2-for-4 for GC.

SHARON, Pa. – Sharon scored six runs in the first inning on its way to a 12-9 win over Hickory.

The top five hitters in Sharon’s lineup all recorded multiple hits and RBIs, led by Peyton Koss and Mikey Rodriques, who drove in three each.

Rodriques, Sully Brown, Jason Stanek, and Dante Currie all had multiple hits for the Tigers.

Brown, Stanek, and Currie drove in two runs each.

That overshadowed big days from Hickory’s Clay Wiesen and Luca Bertolasio, who both homered, both finishing with two RBIs apiece. Bertolasio also tripled.

Stuart Hochstetler had a big game both on the mound and at the plate. He tossed a complete game, allowing the two runs on just four hits, walking two and striking out seven.

Andrew Chapman and Jason Chapman drove in runs for the Braves.

Boyer also went 1-for-3 with a run scored.

Isaac Schleich, Sam Mistretta, and Rocky Serafino all drove in runs for Wilmington.

Cody May had a strong day on the mound in defeat for Kennedy Catholic, allowing three hits and two runs, striking out five.

Cameron Williams went 1-for-4 and drove in four runs for the Blue Devils.

Mason Bevan drove in a pair of runs for the Sailors, with Isaac DeVault driving in another.

April 7, 2021 D9 Baseball/Softball: Bressler Strong on Mound in St. Marys Win; DuBois, St. Marys Softball Offenses Alive
D9and10Sports to Broadcast Cranberry at DCC Softball Game Thursday, April 8 Powered by BHL Sportsperson of the Year Award
This website or its third-party tools process personal data.In case of sale of your personal information, you may opt out by using the link Do not sell my personal information.
×
Manage consent