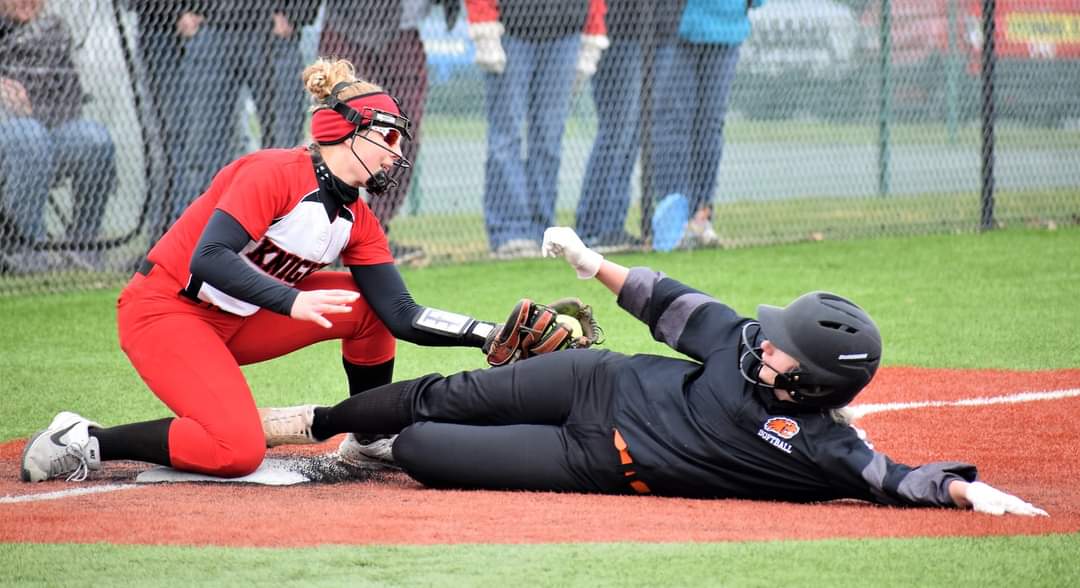 Corry led 6-4 going into the sixth, but the Rockets struck for two runs to tie the game, setting up the heroics of Bugbee.

Slippery Rock actually led 4-2 after two innings, but Corry struck for two runs in each of the third and fourth innings.

Lexy Hasbrouck homered and drove in a pair of runs for Corry, while Braydin Gwin and Haylee also drove in runs for the Beavers.

In the circle, Dyne and Lexi Frisina combined to strike out six and allow 10 hits.

Mackenzie Hartley and Kinzie Miller drove in two runs each for the Rockets, while Paige Gresgott had three hits, including a double.

HERMITAGE, Pa. – Trailing 8-7, Hickory scored three runs in the sixth inning on its way to a 10-9 victory over Jamestown.

The go-ahead hit was a Kendra Koerth RBI single.

Ella Holland delivered a big blow early for the Hornets, belting a second-inning grand slam. Holland and Koerth had three hits apiece for the Hornets.

Holland’s homer was one of two grand slams in the game, as Maya Floch delivered with the bases loaded for Jamestown in the fourth inning.

Kalani Spurlock and Savannah Thurber both had RBI hits for the Muskies.

ERIE, Pa. – Hayley Dever’s 2-run single in the eighth inning was the walk-off winner in Villa Maria’s 3-2 win over Warren.

Maddie Hess struck out 15 Dragon batters in the win.

GIRARD, Pa. – Courtney McDonald set the table for Girard against North East, as the Yellow Jackets’ leadoff hitter reached base four times and scored four runs in a 7-6 victory.

Tori Williams had three hits and drove in a pair of runs for Girard, which jumped out to a 5-2 lead after three innings.

CAMBRIDGE SPRINGS, Pa. – Cambridge Springs erupted for 11 in the fifth inning on its way to a 16-6 win over Maplewood.

Hailee Rodgers went 2-for-3 with a triple and four RBIs for the Blue Devils and was also the winning pitcher, tossing a complete game, allowing 12 hits and striking out six.

Aly Acosta-Reyes had a pair of hits for the Blue Devils, including a solo home run.

Myranda Findlay, Taylor Smith, Rodgers, and Acosta-Reyes all had multiple hits for Cambridge Springs, with Smith driving in three runs and scoring four, while Findlay had three hits.

Izzy Eimer went 2-for-4 for Maplewood, homering and driving in two runs, while Maddie Woge had three hits, including a pair of doubles and Eve Bechat three hits, two runs scored, and an RBI.

Megan Heim hit a 3-run home run in the first inning and collected three hits. Carly Richter had four hits and a pair of RBI.

Jaylin McGill also homered for the Cardinals and drove in a team-high four runs.

The Cardinals scored four runs in each of the first two innings and six in the fourth.

Julia Gesing had two hits and an RBI for Eisenhower, while Phoebe Tower had a hit and a run scored.

Tingley had three hits, while Jordan Brozell, Julie Burger, Sophia Messenger, Cyaira Zielinski, and Reynolds all had two each.

Brozell and Reynolds both drove in four runs and Messenger three, while Bruger belted two doubles.

Alaina Bowers, Lilly Holt, Emily Dick, and Loren Alsdorf all drove in runs in the big third frame for the Big Reds.

Holt had three RBIs for the Big Reds, while Taylor Tomko and Dick drove in two runs each.

In the circle, Ava Gilmore struck out eight and allowed eight hits in her five innings of work.

Megan Snyder had a big game for Commodore Perry, going 3-for-3 with a home run and three RBIs.

Meghan Kapp led the way going 2-for-4 with a double, four RBIs and four runs.

Also for McDowell, Hilary Sissem and Lexxie Biel drove in a pair of runs each.

In the circle, Alivia Soule allowed just one hit and struck out 10.

FAIRVIEW, Pa. – Cami Munson drove in three runs and was also the winning pitcher in Fairview’s 17-0 win over Mercyhurst Prep.

In the circle, Munson struck out seven in her three innings of work.

GROVE CITY, Pa. – Grove City scored nine runs in the second inning on its way to an 18-1, 5-inning victory over Oil City.

Courtney Saylor, Helena Wolbert, Brooke Shingledecker, and Haily Hall each had RBIs in the inning.

Saylor, Shingledecker, and Hall all tallied three RBIs for the Eagles.

Alexis Richards got the pitching win, striking out 10 and allowing just one hit.

Maddie Wenner went 1-for-2 at the plate for Oil City.

The Eagles scored five runs in the third inning to take control of the game.

Jaiidyn Jordan homered and drove in a pair of runs for Conneaut, while Eliza Harrington tripled and had two RBIs. Brooke Wise tripled and scored two runs as well.

Madison Mikotowicz and Baileigh Bleil both had a pair of RBIs for the Huskies.

Cole Constable, Jack Malec, and Jackson Mattocks all delivered RBIs in the inning.

Malec doubled, tripled, and drove in two runs for the Ramblers, who also took advantage of a trio of Fort LeBoeuf errors.

Jake Slater was credited with the win, allowing one run over three innings with a pair of strikeouts.

Luke Costello tripled and drove in a run for the Ramblers.

Dan Caldwell and Alex Jarrett had RBIs for the Bison.