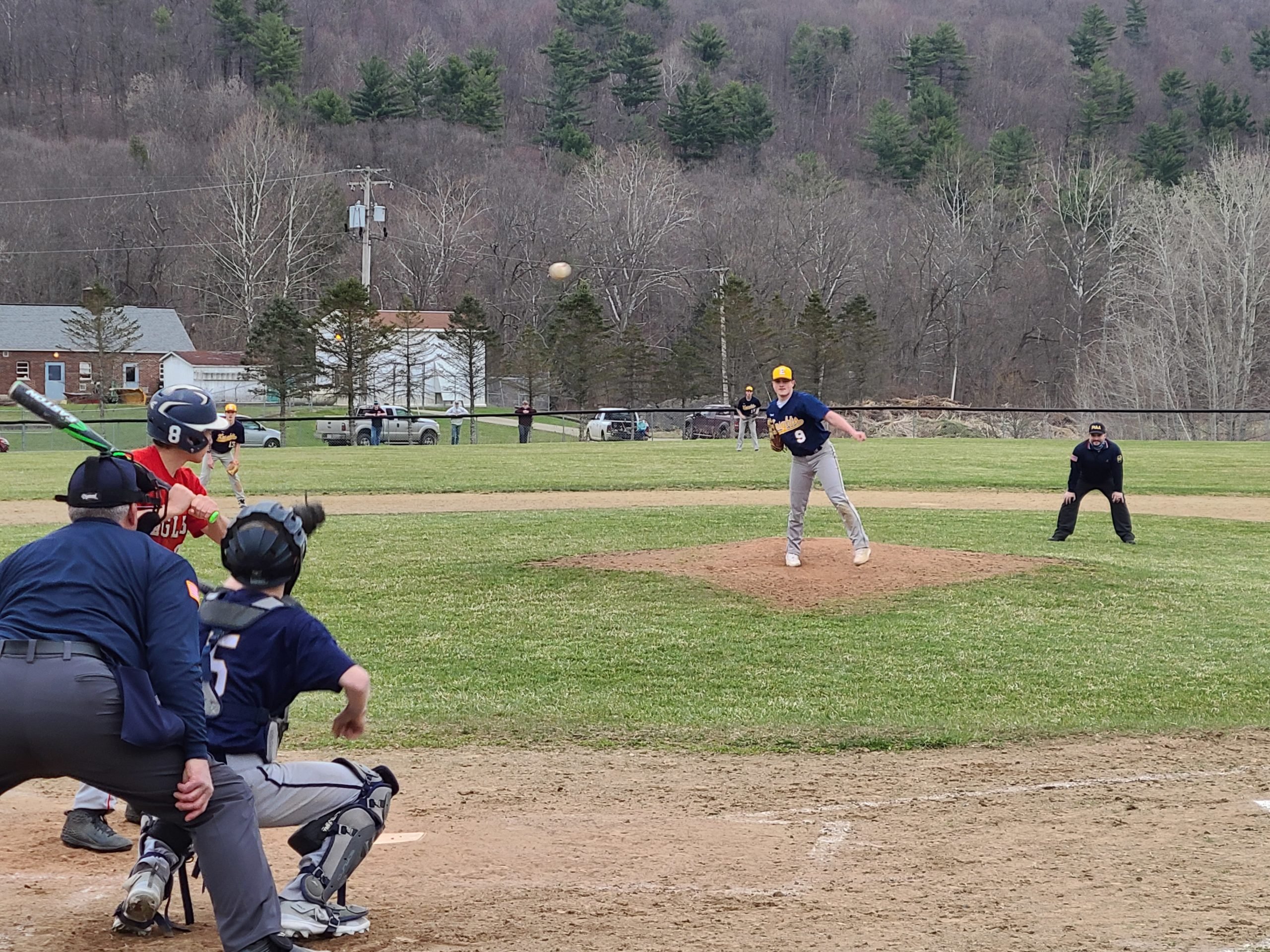 NEW WILMINGTON, Pa. – Colby Lewis’ RBI single with two outs in the eighth inning broke a 5-all tie and was the walk-off winner for Wilmington in its 6-5 win over West Middlesex.

Wilmington led the game 5-1 after four innings, but West Middlesex rallied with three runs in the fifth and another in the seventh to send the game to extra innings.

West Middlesex got on the board in the thrid inning, courtesy of Eric Nehlen’s solo home run.

Nehlen reached base four times in the game, driving in a pair and scoring a pair of runs.

Wilmington responded with three runs in the bottom half of the frame and two more in the fourth.

Garrett Heller went 1-for-3 with a double and a pair of RBIs, while Jaret Boyer and Sam Mistretta also drove in runs for the Greyhounds. Mistretta had two hits in the game.

Heller was also credited for the win, allowing one run and striking out three in 1 ⅔ innings of work.

Richie Preston went 2-for-4 with a double and an RBI for the Big Reds, while Garrett Donaldson also drove in a run.

UNION CITY, Pa. – Union City’s Kyle Myers eighth-inning single with one out proved to be the walk-off winner, driving in the game-winning run in a 10-9 win over Iroquois.

Iroquois trailed 6-1, but rallied with eight runs in the fifth and sixth inning, forcing Union City to rally to force extra innings.

Collin May, Drew Johnson, Andrew Hatton, Jason Chapman, and Hunter Alderjon played a key role in helping the Braves rally, each drive in runs in the fifth and sixth innings.

A wild pitch and subsequent error allowed Union City to rally from the 2-run deficit to tie the game in the seventh.

Steve Reed went 3-for-5 for the Bears, while Shane Uber, Miles McCaslin, and Wyatt Post all drove in runs for the Bears.

May struck out 10 in 3 ⅔ innings of work for Iroquois, as Braves’ pitchers, also including Johnson, Ben Burkhardt, and Reilly Brown combined to strike out 18.

Uber struck out 10 in four innings of work for Union City.

YOUNGSVILLE, Pa. – Eisenhower pounded out 19 hits in a 17-2, 5-inning win over Youngsville.

The Knights scored at least two runs in every inning, including four in the fourth and six in the fifth.

Teagan Gray started on the mound and went three innings, giving up a pair of unearned runs and striking out eight.

At the plate, Gray was 3-for-4 with a double and four RBIs.

Chapman collected three RBIs and Kael Hunt, who went  2-for-3 with a double, had two RBIs, as did Beers.

Zane Alexander pitched the final two innings for the Knights, striking out three.

Jason Beers had Youngsville’s lone hit, while Derek Lucks took the loss on the mound.

Jack Leipheimer drove in a pair of runs for the Blue Devils, while Lenzi, Doyle, and Kolten Eckles had one RBI each.

Leipheimer and Lenzie each went three innings on the mound, combining to allow two earned runs, while Eli Eckle gave up unearned runs in an inning of work.

Mason Jones went 3-for-4 with an RBI for Grove City and Coldan Barr was 2-for-3.

CONNEAUT, OHIO – Alex Kennedy was dominant for Conneaut, earning a complete-game win with 11 strikeouts in the Spartans’ 4-win over Mercer.

Conneaut scored three runs in the first inning thanks to a Zack Rice RBI single and an error that allowed two runs to score.

For Mercer, Troy Bachman doubled, part of a 3-hit effort.

Bachman combined with JAke Mattocks and Cole Cunningham to strike out nine.

HARBOR CREEK, Pa. – Harbor Creek’s Aidan Kelly belted a pair of home runs to help lead the Huskies to a 12-0 blanking of Northwestern.

Kelly also shared the mound duties with Brady Rzodkiewicz and Gio Barbarto, as the trio combined to give up just one hit to the Wildcats.

Casey Smith had a pair of RBIs as well for the Huskies.

Girard scored eight runs in the top of the fourth to take complete control early in the game.

Fiolek and Mcdonald had a pair of RBIs.

Williams got the win on the mound, allowing nine hits and striking out four.

Isabella Danforth had a pair of RBIs for the Spartans.

Hailee Rodgers also drove in a run and got the win on the mound, allowing two earned runs and striking out three.

Taylor Smith went 2-for-3 with a double and two runs scored for Cambridge Springs.

Marisa Mead and Brooke Wise had RBIs for the Eagles.

Ella Krarup homered and drove in a pair of runs and also scored a pair of the Greyhounds.

Paije Peterson and McKenna Bucker drove in a pair of runs each as well for Wilmington.

On the mound, Remi Koi got the win, allowing just one run and striking out five.

Holt belted a triple and had three hits, while Briggs finished with three RBis and Tomko two.

Gilmore got the win on the mound, allowing an unearned run and striking out nine.

Danielle Ficetti struck out seven in getting the win on the mound, while Rieane Zajac had a 3-hit effort for the Muskies.

April 5, 2021 D9 Baseball/Softball Recaps: 12-run First Helps Jburg BB to Win; Young Tosses Shutout for St. Marys SB
Watch/Listen Live: Clarion at Clarion-Limestone Baseball Powered by the BHL Sportsperson of the Year Award
We use cookies on our website to give you the most relevant experience by remembering your preferences and repeat visits. By clicking “Accept All”, you consent to the use of ALL the cookies. However, you may visit "Cookie Settings" to provide a controlled consent.
Cookie SettingsAccept All
Manage consent