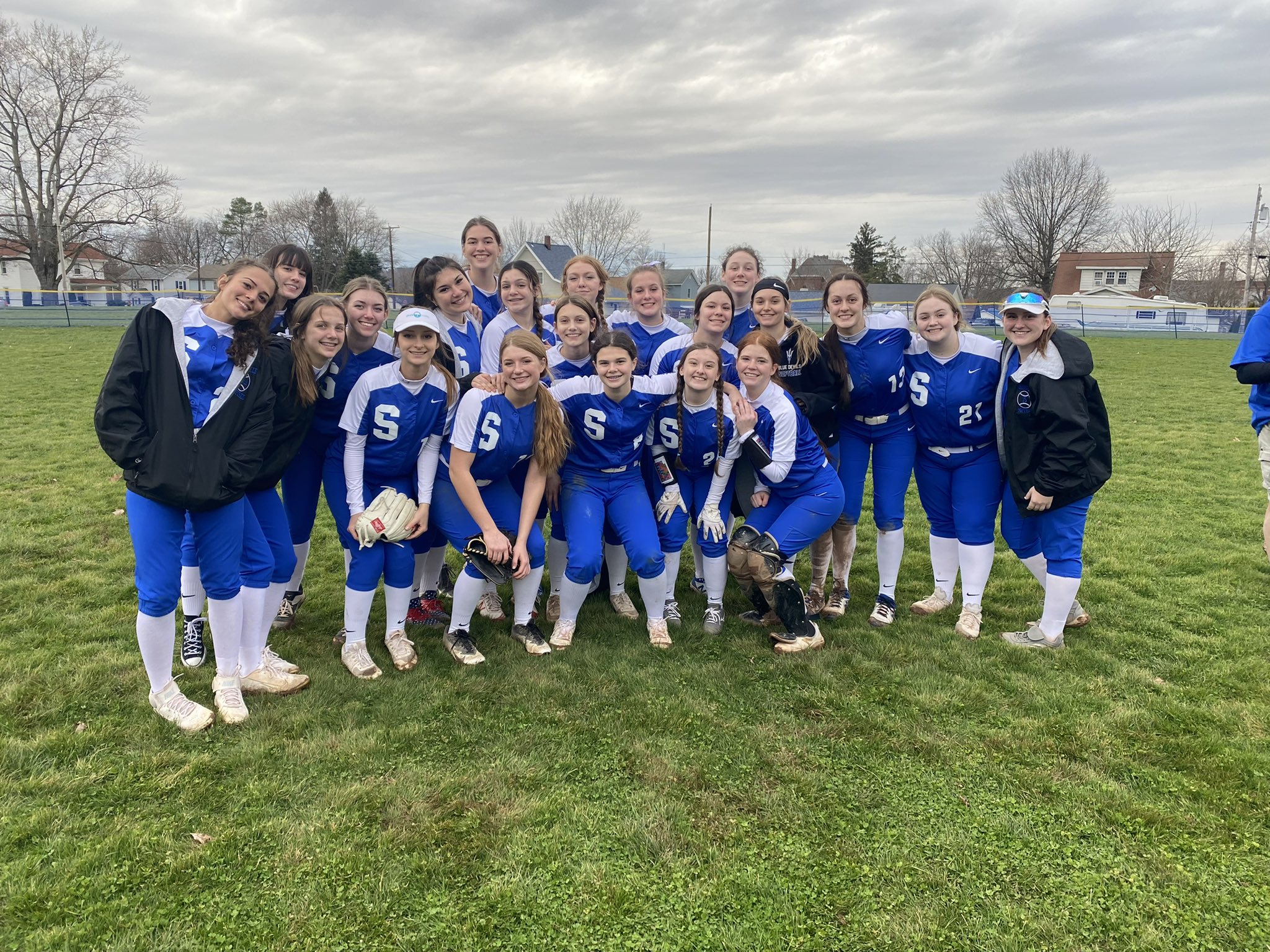 SLIPPERY ROCK, Pa. – Grove City scored five runs in the top of the seventh inning to earn an 8-6 win over Slippery Rock.

Morgan Eaton had a big day at the plate for Slippery Rock, going 4-for-4 with two runs, while Wolbert was also 2-for-4 and Courtney Saylor 1-for-1 with a walk and a pair of runs scored.

Ciara D’Antoni was 1-for3 with an RBI for Slippery Rock, while Sam Meredith had an RBI double.

HERMITAGE, Pa. – Sharpsville scored 13 runs in the first inning on its way to a 22-0, three-inning win over Kennedy Catholic.

FARRELL, Pa. – Wilmington pounded out 16 hits in an 18-0, three-inning win over Farrell.

Chloe Krarup was 2-for-2 with three RBIs and three runs for the Greyhounds, while Faith Jones, Karah Deal, Malia Baney, and Brianna Fisher drove in two runs apiece.

Jadyn Flick tossed three innings to get the win, allowing one hit and striking out four.

RUSSELL, Pa. – The top five hitters in Maplewood’s lineup all scored to start the game, as the Tigers beat Eisenhower, 19-9.

Izzy Eimer had a big day at the plate for Maplewood, hitting two doubles and scoring five runs. Eve Beuchat also had a pair of hits and scored four runs for Eisenhower, while McKenna Crawford also crossed the plate three times for Maplewood.

Julia Gesing, Kailee Morrison, Taylor Napolitan, Abigail Grundenle, Lillian SmythAliza Olsen, Tracey Jakubczak and Cali Chapman all reached and scored for Eisenhower in their big fourth innings, which was keyed by a run-scoring double off the bat of Napolitan.

Rhinn Post got the win for Maplewood, while Taylor Napolitan suffered the loss for Eisenhower.

Stull struck out nine without issuing a walk, throwing 72 of her 99 pitches for strikes. Stull was also 2-for-3 with a solo home run at the plate, while Tessa Bellis belted a two-run home run.

Edge went 2-for-4 with three RBIs, as Franklin scored seven runs in the fifth inning. In the circle, she allowed just two hits, walked one, and struck out 12, throwing 53 of her 74 pitches for strikes.

Abby Boland was 3-for-3 with a triple, RBI, and two runs, while Gabriella Wimer drove in a pair of runs and Brandy Atwell and Sydni Hoobler scored two runs each.

HARBORCREEK, Pa. – Harbor Creek built an 8-2 lead and held off a late North East for an 8-7 victory.

Alex Cozzens stole home to get the game with 8-7 in the top of the seventh, but Rachel Holmes was able to get the next two outs to secure the win.

Rylee Vogt went 3-for-3 with a double and two RBIs for Harbor Creek, while Regan Rand also drove in two runs and Georgia Weber had a triple, two hits, and an RBI.

Cozzens took the loss for North East, allowing eight runs (seven earned) on 12 hits, striking out three, and walking one.

Kaeyln Fustos, Ava Houy, and Madeline Myers all had two hits for Hickory, with Myers driving in a run. Kendra Koerth, Madison Reardon, and Lydia Hallas all had RBIs for Hickory, which took advantage of five Sharon errors.

MERCER, Pa. – Mackenzie Herman and Chloe McLaughlin both homered and combined to drive in nine runs as Reynolds beat Mercer, 14-2.

YOUNGSVILLE, Pa. – Cochranton scored 15 runs in the second inning on its way to a 24-4, three-inning win over Youngsville.

Abby Tingley tossed a three-hitter, striking out nine and walking one.

The Lady Bears scored 10 runs in the first two innings en route to the win.

Emylee Zielinski was 2-for-4 with a double and two runs, while Kaegann Gregor was 3-for-3 with an RBI and Tingley 2-for-3 with a triple and an RBI.

Wagner struck out 11 without issuing a walk.

The Victors scored four runs in the third inning to break the game open, capped by Simmerna’s three-run home run.

Emily Dudenhoeffer was 2-for-3 with two RBIs for Villa.