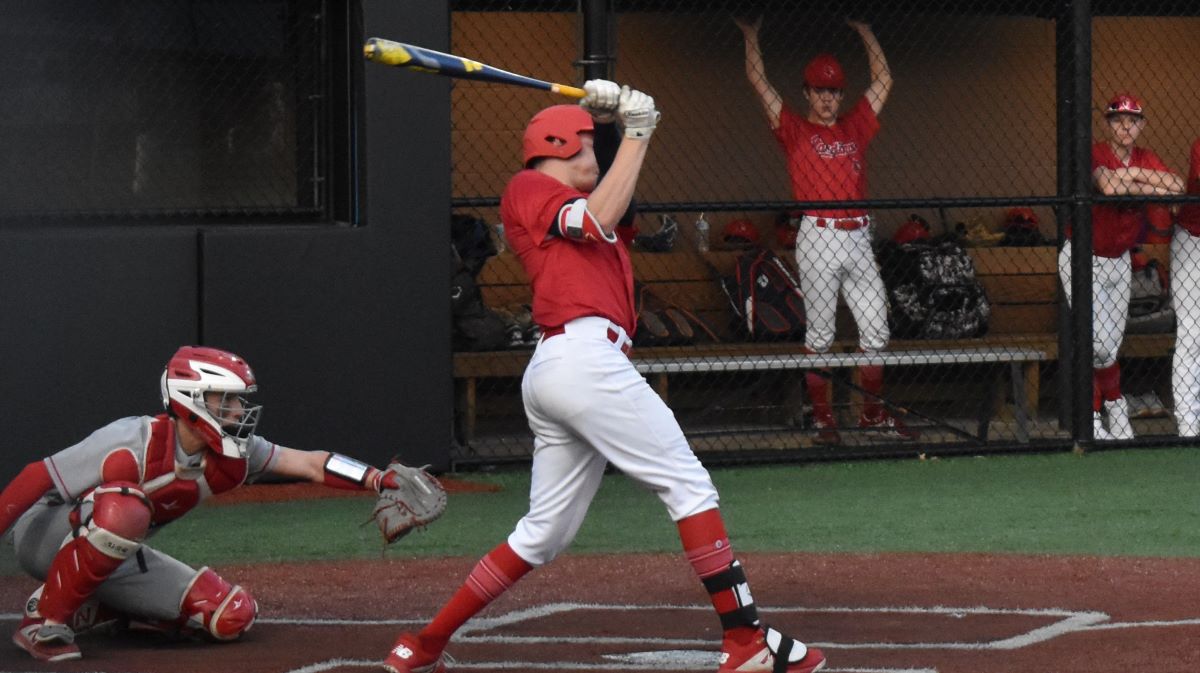 DCC's Cole Sansom takes a swing in the third inning of Saturday's win. Sansom singled in his plate appearance during the AB and also returned to the mound for the first time in three years. Photo by Chris Rossetti

DUBOIS, Pa. – Building a 7-0 lead after three innings of play, DuBois Central Catholic beat visiting Redbank Valley, 8-4, in a game that featured the return of DCC’s Cole Sansom to the mound after a three-year absence.

Sansom last pitched for the Cardinals as a freshman in 2019 before missing the 2020 season when it was shut down because of COVID-19 and then last season after undergoing Tommy John Surgery.

But the lanky lefty made his much-anticipated return to the mound in relief Saturday night and did so in grand fashion striking out the side in the sixth inning before getting the only batter he faced in the seventh to pop out.

“It felt good,” Sansom said. “It has been a while, so it was fun. It felt like such a long time, I root for all of these guys, and I just want to help them as much as I can.”

Sansom, who said he didn’t have any nerves in his return to the bump, said his arm felt good.

The game was started by a pair of college-bound pitchers with DCC sending Youngstown St. recruit Brandin Anderson to the mound against IUP commit Bryson Bain for Redbank Valley.

And while Anderson was strong early retiring the first eight men he faced, Bain struggled in the opening inning allowing four runs on five hits and two walks.

The first four batters reached base against Bain, and DCC sent 10 batters to the plate in the inning.

The Cardinals then tacked on three more runs in the third to go up 7-0 before Redbank Valley scored three in the fourth and one in the fifth to get back into the game. DCC regained a four-run lead with one in the bottom of the fifth.

Aiden Snowberger set the table for the Cardinals out of the leadoff spot going 2-for-4 with a run scored and two RBIs, while No. 9 hitter Matt Pyne was 2-for-3 with an RBI, and two runs scored.

Sansom also had a nice night at the plate going 1-for-3 with an RBI and two runs scored.

Ty Carrier had a pair of RBIs for Redbank Valley going 1-for-3, while Bain scored twice while walking three times.

Snowberger pitched a ⅓ of an inning but struck out two with one reaching on a wild pitch. Sansom then pitched his 1 ⅓ innings striking out three, and Carter Hickman finished off with a ⅔ of an inning scoreless walking one and striking out one.

Ty Carrier pitched well in relief for the Bulldogs giving up one unearned run on a hit, a walk, and a hit batter while striking out four.

NEW CASTLE, Pa. – In a rematch of a PIAA second-round playoff game from last season, Johnsonburg got a bit of revenge with a 13-8 win over defending WPIAL Class 2A champion Shenango on the road.

Seven runs in the first two innings plus a six-run fourth helped the Rams topple the team that eliminated it from postseason play a year ago by a 2-1 count in extra innings.

Ethan Wells and Aiden Zimmerman went deep for Johnsonburg with Aiden Zimmerman also adding a double while going 2-for-4 with three runs scored and four RBIs out of the leadoff spot.

Wells was 1-for-4 with a walk, two runs scored, and three RBIs.

Joe Campoli hit a home run for Shenango while going 2-for-4 with two runs scored and three RBIs.

CJ Coliazi was also 2-for-4 with two RBIs for the Wildcats, and Adam Bryant added a pair of RBIs.

Prince allowed just three hits while hitting a batter and walking no one in getting the shutout. He struck out 16.

Blaine Moses drove in a pair of runs for the Gators while going 1-for-3 with a run scored, while Noah Archer scored twice and was 1-for-3. Prince also walked and scored a run to help his own cause.

CURWENSVILLE, Pa. – Jake Mullins was outstanding on the hill in throwing a 3-hit shutout in a 6-0 Curwensville win over visiting Moshannon Valley.

Mullins walked one and struck out 14.

Also for Curwensville, Jayson Rowles went 2-for-4 with a run scored and an RBI.

Michael Kitko was 2-for-3 with a double for Moshannon Valley.

BROCKWAY, Pa. – Marcus Bennett’s two-run, two-out triple in the bottom of the sixth gave Brockway a 6-4 win over visiting Otto-Eldred.

The Rovers trailed 4-3 entering the sixth before tying the game when Jeremy Swanson reached on a two-out error that saw a second error also occur on the play.

Matthew Brubaker was then hit by a pitch, and Bennett tripled to center.

Chad Young, who had relieved Andrew Brubaker with two outs in the sixth, then retired Otto-Eldred 1-2-3 in the seventh to close out the victory.

Bennett had a big day at the plate going 3-for-4 with the triple and three RBIs.

Daniel Shugarts was also 2-for-3 for Brockway, while Young was 2-for-2 with a walk.

Max Splain was 2-for-3 with a double, a walk, and two runs scored for Otto-Eldred with Calvin Minich, Andrew Schenfield, and Jacob Coffman each driving in runs.

McClain Welshans was also 2-for-3 with two runs scored and two RBIs for the Rams.

Morgan Billotte went 2-for-4 with a run scored, and Cole Bloom was 2-for-3 with two runs scored for Clearfield.

Hunter Lyons picked up the save throwing a scoreless seventh allowing a hit and striking out the side.

Colby Sweitzer started for Penns Valley and got just five outs allowing an unearned run on a hit and a walk while striking out three.

DUBOIS, Pa. – Erik Rhodes went 3-for-4 with a double, a run scored, and three RBIs to lift visiting Altoona to a 15-5, five-inning win over DuBois at Showers Field in DuBois.

Lucas Muffie added a pair of RBIs for the Mountain Lions while going 1-for-1 with two walks and a run scored, while Matt Moyer walked twice, scored twice, and drove in two runs.

PUNXSUTAWNEY, Pa. – Living up to his name, Gavin Homer homered while going 2-for-3 with two runs scored, and four RBIs in Indiana’s 12-3 win at Punxsutawney.

Isaac London was 2-for-3 with a walk and an RBI for Punxsutawney with Peyton Hetrick going 2-for-3.

Garrison Dougherty started and went three innings allowing one earned run on two hits and three walks while striking out one.

Yanity finished off throwing a scoreless seventh allowing a hit.

Justin Miller pitched 3 ⅓ innings allowing three runs, one earned, on five hits and a walk while striking out five. Carter Savage was wild walking two and hitting four while allowing a hit and two earned runs in two innings of work. He struck out two.

ST. MARYS, Pa. – Getting multiple RBIs from five different players, Williamsport hit the road and picked up a 14-1, five-inning victory over St. Marys.

Deacon Brown drove in three runs for the Millionaires going 1-for-2 with two walks and two runs scored.

Dallas Griess had the lone extra-base hit for Williamsport, a double, while going 2-for-3 with a walk, three runs scored, and two RBIs.

Xavier Taylor was 1-for-3 with a walk, three runs scored, and two RBIs with Tommy Aversa and OwenBerry also each driving in a pair of runs.

Adam Aldenderfer contributed to the victory by going 2-for-3 with two runs scored, Griffin Vollman was 2-for-2 with a walk and three runs scored, and Cayden Roberston was 2-for-4 with an RBI.

Logan Mosier went 1-for-2 with a walk and a run scored for St. Marys.

April 23, 2022 D9 SB: Cranberry Sweeps ACV; Brockway Gets First Win
April 25, 2022 D9/10 Baseball/Softball Schedule Powered by the BHL Sportsperson of the Year Award
This website or its third-party tools process personal data.In case of sale of your personal information, you may opt out by using the link Do not sell my personal information.
×
Manage consent