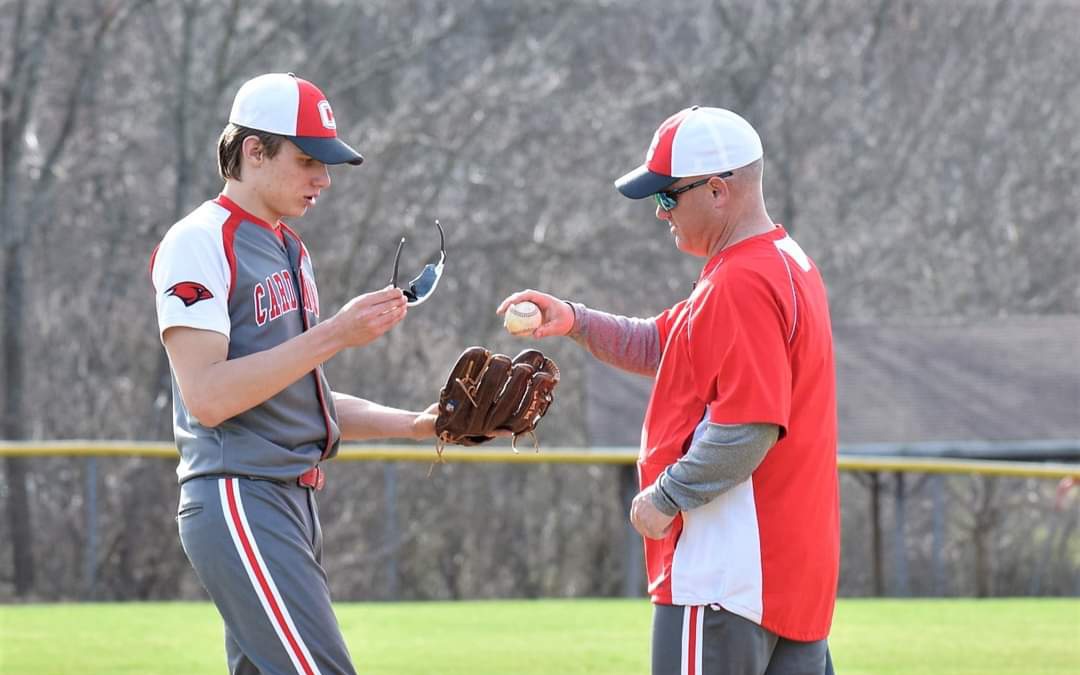 COCHRANTON, Pa. – Wyatt Barzak had a game to remember for Cochranton, firing a no-hitter and also belting two home runs in a 7-0 win over Iroquois.

At the plate, Barzak belted two-run homers in both the third and fourth innings, finishing 2-for-4 with five RBIs. Ben Field went 2-for-3 with an RBI for the Cardinals.

NEW WILMINGTON, Pa. – Wilmington scored seven runs in the third inning on its way to a 14-5 win over Mercer.

Garrett Heller got the win, going four innings and allowing two runs (both unearned) on one hit and three walks, striking out two.

Troy Bachman took the loss, allowing eight runs (one earned) in three innings on 10 hits, striking out one and walking two.

STONEBORO, Pa. – Owen Dye had two hits and drove in three runs as Lakeview earned an 11-6 win over Lakeview.

Cody Fagley and Chase Hostetler drove in two runs apiece for the Sailors, who scored in five of the seven innings, including three each in the fifth and sixth frames.

Connor Doeberiener went 2-for-2 with a double, two RBIs, and two runs for Jamestown.

Abrams allowed just four hits, striking out nine and walking two. He threw 59 of his 96 pitches for strikes.

The Rockets scored both of their runs in the sixth inning on an error and a sacrifice fly off the bat of Brock Covell.

Ethan Drushel went 2-for-3 with two runs for the Rockets, who scored two runs in the second and two more in the fifth. Shane Thompson was 2-for-4 with an RBI as well for the Rockets.

Double went five innings on the mound, allowing just one run on three hits, striking out two, and walking five.

WARREN, Pa. – Anthony Errett went 2-for-3 with three RBIs as Warren earned a 6-4 win over McDowell.

The Dragons scored four runs in the first inning en route to the win. In that inning, Errett delivered a two-run single, as did Paul Smith.

CORRY, Pa. – Cathedral Prep scored all 11 of its runs in the first three innings in an 11-0, five-inning win over Corry.

Jacob Engel was strong on the mound, allowing just one hit in 4 ⅔ innings, striking out seven and walking two.

FRANKLIN, Pa. – An eight-run second inning lifted Fairview to a 10-5 win over Franklin.

Eight different Fairview players recorded an RBI, with Aari Fox and Logan Fiolek driving in a pair each. Fiolek, Fox, and Eddie Dolansky all had two hits each.

Fiolek got the win, going four innings and allowing three runs on four hits, walking one and striking out seven.

Aidan McCracken and Noah Kockler drove in two runs each for Franklin, while Carson Wible had two doubles and scored two runs.

HERMITAGE, Pa. – Ty Covell’s RBI single in the top of the seventh provided the insurance run Conneaut needed in a 4-3 win over Kennedy Catholic.

Covel’s RBI made it 4-2, and Riley Mastowski’s RBI fielder’s choice got Kennedy to within one in the bottom of the seventh, but Alex Kennedy was able to strike out the next two batters to preserve the win.

Kennedy tossed a complete-game, striking out 15 and allowing 10 hits and four walks.

Sy Piccirilli scored on a passed ball in the bottom of the sixth to make it 4-2, giving the Tigers an all-important insurance run.

Hayden McCreadie’s’ RBI groundout got Sharon to within one in the seventh, but Garrett Hoffman got a groundout to secure the win.

Hoffman got the save in relief of Mikey Rodriques, who got the win. Rodriques fired 6 ⅔ strong innings, allowing three runs (one earned), allowing just two hits, and striking out eight.

Saegertown also took advantage of five Union City errors en route to the win. The Panthers scored four runs in the third inning and five in the sixth and seventh.

Zach Balog, Wyatt Burchill, Anthony Hernandez, and Garrett Young all drove in one run each for Saegertown.

Balog got the win, tossing three hitless innings, striking out one.

Trevor Hamilton was 3-for-3 for Rocky Grove, scoring three runs and driving in two. Five different Orioles had one RBI each.

Isaac Clayton was strong on the mound, going 4 ⅔ innings and allowing one run on two hits, striking out eight and walking one.