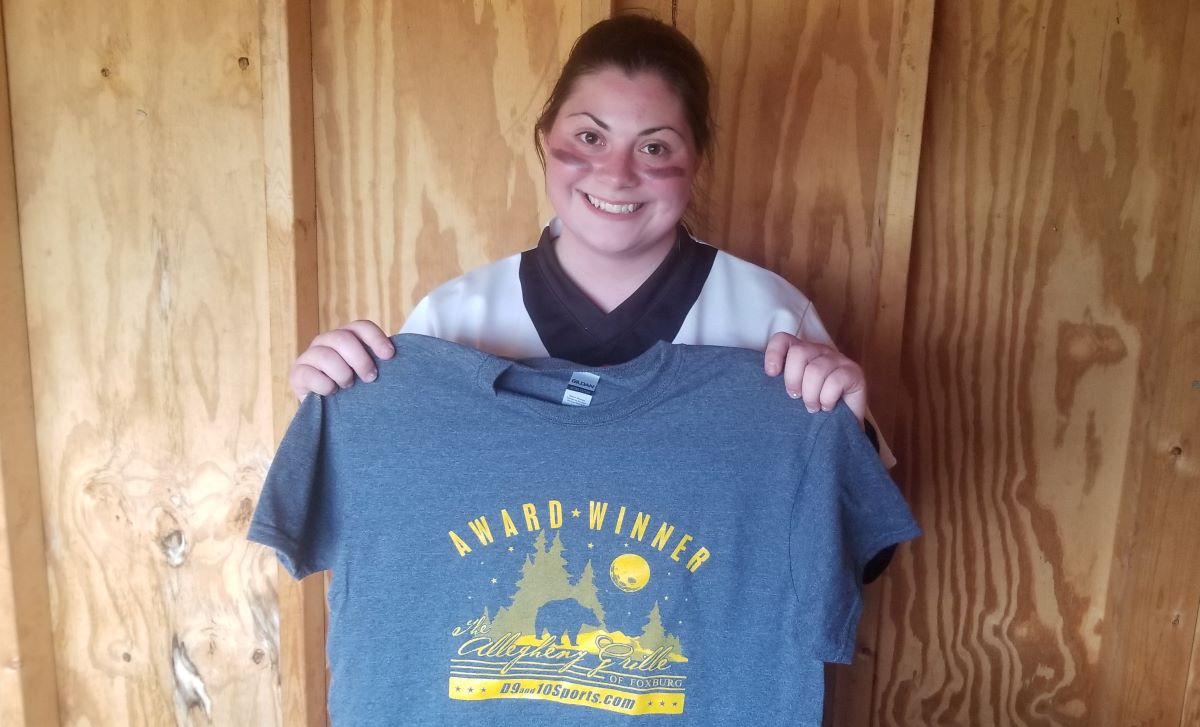 CLARION, Pa. – Kylee Beers was 3-for-4 with two doubles, two runs scored, and four RBIs to lead Clarion to a 13-3, 5 inning win over visiting Forest Area at Paul A. Weaver Park.

“Yesterday at practice, we worked a lot on fielding the ball, getting cuts (cut-offs), finding gaps, and all that stuff,” Beers said. “I think all that really helped.”

Jordan Best also had a pair of doubles while going 3-for-4 with two runs scored and two RBIs, and Noel Anthony, who was a game-time decision because of an injury, went 2-for-3 with a home run, two runs scored, a walk, and an RBI for the Lady Cats.

Watch Anthony swing for the fences

“I was so happy for her,” Beers said.

Bri Forrest added a pair of RBIs in the victory wand was 1-for-3, while Emily Troese scored twice and was 1-for-2 with a walk.

Faith Dietrich was 1-for-3 with an RBI for Forest Area with Emily Aites going 1-for-1 with two walks and a run scored. Amber Guzzi walked twice and stole a pair of bases for the Fires.

Payton Simko got the win allowing three runs, two earned, on two hits and nine walks while striking out seven in five innings of work.

Watch Simko strikeout Jessica Wagner with runners at the corners and one out in the third.

“It was awesome (to see Payton get in the grove),” Beers said. “It felt so good.”

The Lady Cardinals scored multiple runs in every inning, including eight in the third.

Risser’s home run, a 3-run shot, came in the third inning. Melia Mitskavich also hit a 2-run home run in the inning for the Lady Cardinals.

Check out both of the home runs here:

Sydney Alexander got ECC on the board with an RBI single in the first. See it here:

Gabby Weisner had an RBI single and Tessa Fledderman an RBI groundout for the Lady Crusaders, while Emily Mourer had a pair of hits.

Madison Stahli had six hits on the day including four doubles, a triple, and a single, drove in six runs and scored four times to lead Kane, while Leah Tigani added five hits on the day with seven runs scored and seven RBIs.

Also for the Lady Wolves, Maya Smith had five hits in the two games, including a triple, and had five RBIs with Kate Parana picking up three hits in Game One and Makieya McGuire adding a triple and a single in Game Two.

Stahli got the win in Game One with Smith picking up the victory in Game Two.

Morgan Lindemuth had three hits, including a double, two runs scored, and two RBIs on the day for Brockway.

Pentz was 5-for-6 with two triples, a double, two RBIs, and four runs scored to lead the Lady Tide, while Logan Sheeder and Shyanne Rudy each drove in four runs.

Sheeder was 2-for-6 with a run scored with Rudy going 4-for-5 with a double and three runs scored.

Julia Jones was 2-for-4 with a double, a run scored and three RBIs for Johnsonburg with Payton Delhunty going 2-for-4 with two double and two RBIs.

Also for the Ramettes, Julie Peterson was 2-for-4 with a run scored and two RBIs, and Jenna Pavlock was 1-for-4 with a walk, an RBI, and two runs scored.

The game was actually low scoring through four innings with Curwensville holding a 2-1 lead.

The Lady Tide made it 6-1 with four runs in the top of the fifth before Johnsonburg scored two in the bottom of the fifth to make it 6-3.

Curwensville then exploded for seven runs in the sixth to go up 13-3 before the Ramettes answered with six of their own in the bottom of the inning to not only stave off the 10-run rule but also close within four, 13-9.

However, a five-run seventh put the capper on the win for the Lady Tide.

Freyer got the win allowing nine earned runs on 10 hits, four walks, and two hit batters while striking out nine.

SENECA, Pa. – Alaina Hogue drove in four runs while going 3-for-4 with a double and two runs scored to lead Cranberry past visiting Clarion-Limestone, 16-6, in five innings.

Olivia Plummer also had three RBIs for the Berries going 2-for-3 with a double, a walk, and two runs scored, while Reyna Watson was 4-for-4 on the afternoon with a double and four runs scored.

KNOX, Pa. – Alexandria Johnston was 3-for-3 with two doubles and a run scored to help Keystone to a 12-2, six-inning win over visiting Union.

Maddie Dunlap also doubled for Keystone while going 2-for-3 with an RBI and two runs scored.

Morgan Cumberland was 2-for-3 with a run scored for Union with Ava Shreckengost going 2-for-3.

Johnston took the loss pitching seven innings allowing 12 runs, only one earned, on 12 hits and three walks while striking out five.

In Game Two, Punxsutawney used a three-run top of the first to pull out the 4-2 victory.

Presloid and Young both had doubles in the contest for the Lady Chucks with Presloid going 1-for-3 with a run scored and Young 1-for-3.

Malone was 2-for-4 with a double, a run scored, and an RBI to lead Hollidaysburg.

Olivia Vincent took the loss allowing four runs, two earned, on five hits and two walks while striking out one in seven innings.

Blair got the rally started with a leadoff single before an error moved her to third.

St. Marys had tied the game at seven in the top of the seventh when Shannon Kiser doubled leading off the inning and scored on a one-out single to center by Kara Hanslovan.

The Lady Dutch held the early advantage taking a 6-0 lead after 2 ½ innings, but Williamsport answered a St. Marys two-spot in the third with four runs of its own in the bottom of the inning to get back in the game.

The Millionaires then tied the game with a two-run fifth before taking a 7-6 lead with a run in the sixth.

Blair had a big day for Williamsport going 3-for-4 with a home run, two runs scored, and three RBIs.

Hanslovan was 3-for-4 with the RBI and two runs scored, while Brianna Grotzinger hit a home run while going 1-for-4 with a run scored and three RBIs for St. Marys.

Kendall McAnelly got the win in relief pitching four innings allowing one earned run on four hits and a walk while striking out four.

Avery Eiswerth started for Williamsport and pitched three innings allowing six runs, one earned, on four hits and a walk while striking out three.