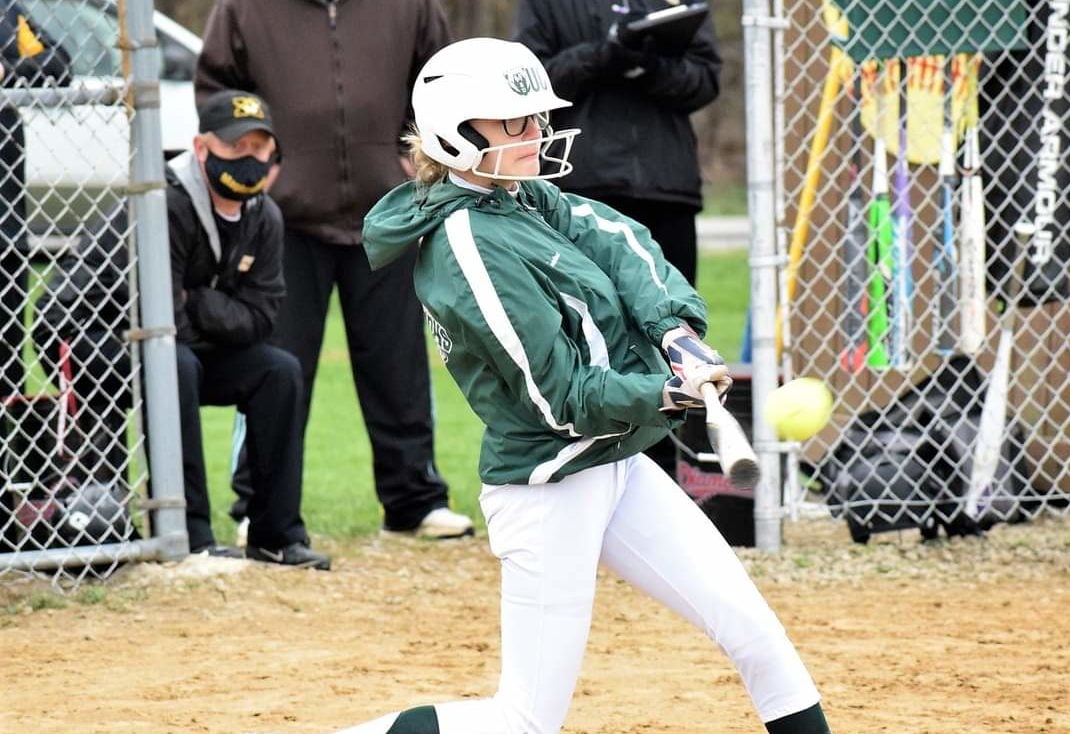 Jamestown led the game, 4-0, but Corry scored four runs in the sixth to tie the game.

Braydin Gwin’s 2-run single got things going for Corry in the sixth, and was followed later in the inning on a 2-run single off the bat of Lexi Frisina.

Jamestown scored single runs in the first two innings and two more in the fourth.

Josie Pfaff and Reese Schaller had RBI doubles and Kiley Matters and RBI single for the Muskies, who also scored a run on a passed ball. Pfaff had two hits in the game.

Gwin and Frisina had two hits each for Corry.

GIRARD, Pa. – A furious Girard rally came up just short, as Harbor Creek held on for a 5-4 win.

The Yellow Jackets trailed 5-1, but a Courtney McDonald 2-run home run cut the deficit to 5-4, this after an error brought in the first run of the inning.

Haiden Manning, who was the winning pitcher, worked out of the inning with a pair of ground outs. Manning allowed three earned runs in her complete-game victory, allowing four hits and five walks while striking out nine.

The Huskies scored two runs each in the first and third innings to take a 4-0 lead.

Kylie Pinetti’s 2-run single made it 2-0. It was part of a 4-RBI effort from Pinetti, who added another RBI single as well as a run-scoring double in the game. She collected three of Harbor Creek’s 11 hits, with Maura Benim and Alayna Mosbacher notching two each.

The Bears belted five home runs in the game and a total of 11 extra-base hits.

Sophia Messenger belted a pair of dingers for Union City, including a grand slam, driving in a total of six runs. Sydney Gilbert, Cyaira Zielinski and Eliza Reynolds all went deep as well.

Abby Tingley got the win, allowing three hits in her five innings of work, striking out 10 without issuing a walk.

The Dragon senior struck out eight and walked three.

Alix Lytle’s RBI single made it 1-0 Warren in the first, and they delivered a 3-run fifth inning.

Those runs came courtesy of a Katie Madigan RBI double and a 2-run single off the bat of Alex Neureiter.

Rylie Yeager and Elee Irwin both had two hits and a run scored each for the Dragons.

CAMBRIDGE SPRINGS, Pa. – A 3-run sixth inning ultimately gave Cambridge Springs the insurance they needed in a 7-5 win over Cochranton.

Myranda Finday had an RBI groundout and Aly Acosta-Reyes and Chloe Schultz RBI singles in the inning for the Blue Devils.

Paige Verbanac and Kylee Miller had two hits and two RBIs apiece for the Blue Devils.

Hailee Rodgers got the win, striking out four and allowing 12 hits in the complete-game effort.

Lexie Moore belted home runs in back-to-back innings for Cochranton – a solo shot in the sixth and a two-run blast in the seventh.

Phoebe Eakman went 2-for-2 with a double and four RBIs, while Pessley Washil drove in three for the Mustangs.

A 9-run fourth inning helped power Conneaut to the win. Five of those runs were the result of errors, while Householder, Pasanen, and Leah Huston had RBIs.

Iroquois scored four runs in the fifth inning as Makenzie Lybrook, Milla Gehrlein, and Grace Abele all had RBIs in the inning.

Abele went 3-for-5 with four RBIs for the BRaves, while Jenna Dash went 2-for-4 with three RBIs.

Kaitlyn Bean got the win for Conneaut.

Konkol got the win, striking out four.

Audrey Herman and Lindsay Sines drove in three runs each for the Rockets.

Herman, Sines, Rylie McGarvie, Mahalia Campbell, and Bri Wynn all drove in runs in the big inning for Titusville.

Herman got the win, striking out 12 and allowing four hits in her five innings of work.

Maddie Wenner had an RBI triple for Oil City.

HERMITAGE, Pa. – Ella Holland and Hallie Miller drove in three runs each to help Hickory to a 17-2 victory over Franklin.

Carlie Miller and Kaitlyn Gilliland drove in two runs each for the Hornets.

The Eagles had 16 hits and a number of big innings, including nine in the sixth, five in the fourth, and four in the third.

Jones had had a 2-run single the first, a run-scoring base hit in the fourth, a sacrifice fly in the fifth, and another 2-run single in the sixth. His home run was a 3-run shot in the third.

Luke Tubbs went 1-for-4 with four RBIs for the Eagles.

Michael Brooks, Coldan Barr, and Towan Perample all had multiple hits for the Eagles as well.

The Rockets got the scoring going with four runs in the third, followed by two in the fourth and a big 6-run sixth inning.

Galick homered in the third inning and also had an RBI double in the sixth.

On the mound, Vogan struck out nine and walked four, throwing 52 of his 91 pitches for strikes.

Sal Mineo drove in a pair of runs for the Rockets, while Ethan Drushel and Shane Thompson had two hits apiece.

The Rockets had 12 hits.

Ryan Richardson took the loss for Conneaut, allowing four earned runs on five hits and a walk in his three innings of work, striking out a pair.