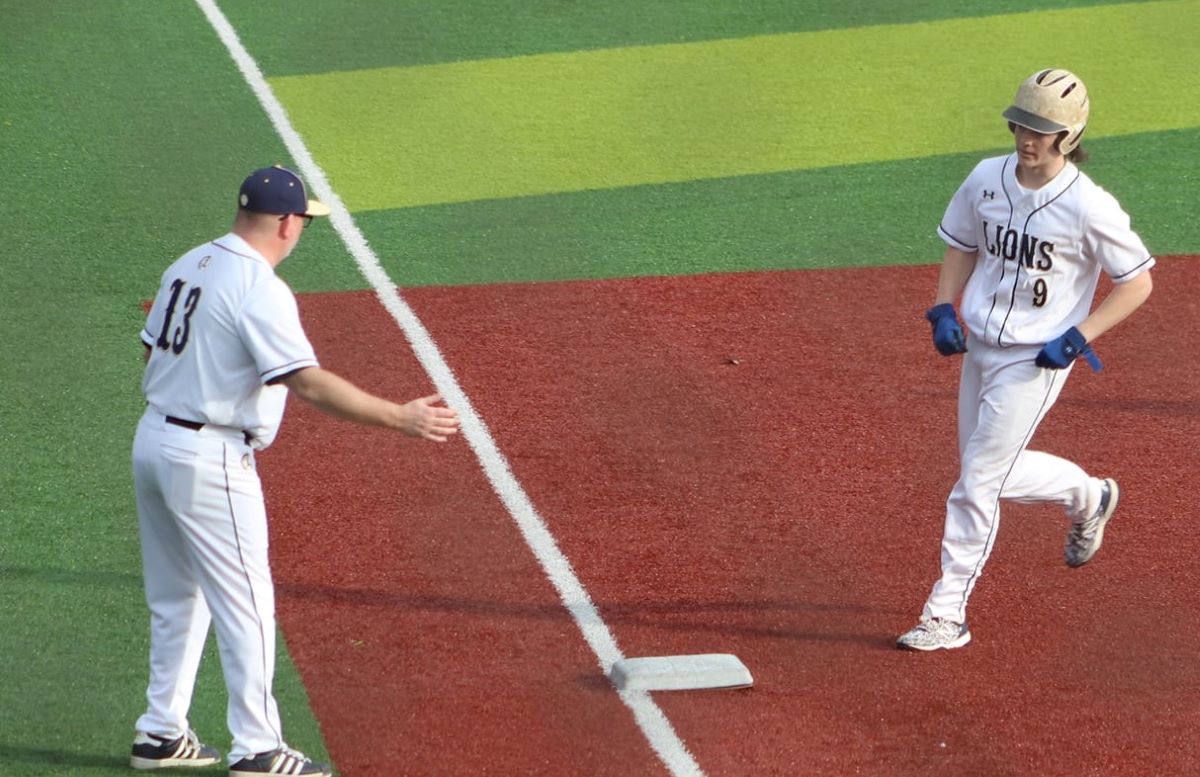 C-L manager and third-base coach Todd Smith gets ready to greet Bryson Huwar after Huwar's eighth-inning home run gave C-L a 2-1 lead on its way to a 3-1 win over DCC Wednesday. Photo by Diane Lutz

DUBOIS, Pa. – Bryson Huwar took a no-hitter into the seventh inning and then hit the game-winning home run in the top of the eighth after giving up a run in the seventh to lift Clarion-Limestone to a 3-1, eight-inning win over DuBois Central Catholic at Stern Field in DuBois.

Huwar and the Lions, making their long-awaited season debut, locked horns with the Cardinals, who were playing for the sixth time on the year, and it turned into a pitcher’s duel between Huwar and DCC’s Brandin Anderson and Aiden Snowberger.

C-L took a 1-0 lead in the fourth inning on a Jase Ferguson RBI groundout, and Huwar cruised into the seventh inning allowing just two base runners on a walk and a hit batter.

But Brayden Fox led off the seventh with a base hit to right field through the hole between first and second, and Ben Gritzer’s groundout moved him to second.

Cole Sansom then tied the game with a base hit to right just past first baseman Nick Aaron.

Huwar, who was 0-for-3 up to that point having grounded into a double play and struck out twice, picked himself up in the top of the eighth with two outs when he drilled a 1-0 pitch from Snowberger over the left-field fence to give C-L the lead back.

C-L added a second run in the inning when Jordan Hesdon followed the Huwar home run with a double off the center-field fence and Aaron followed with a single to center.

Huwar had 12 pitches left (the high-school limit is 100 pitches on first pitch to a batter) needing three outs.

He got the first two outs in quick order before hitting Carter Hickman but still had enough pitches left to face Brayden Fox. After throwing ball one to Fox, Huwar picked off pinch runner Andrew Green to end the game.

Watch Huwar pick off Green to end the game

Huwar’s final pitching line was eight innings, one earned run on three hits, a walk, and a hit batter while striking out nine.

Named the Allegheny Grille of Foxburg Player of the Game, Huwar talked about the victory.

Hesdon led the C-L offense going 2-for-4 with the double and two runs scored.

Fox was 1-for-3 with a run scored and Sansom was 1-for-2 with an RBI while also being hit by a pitch.

With the Rams leading 3-2, No. 9 hitter Eric Panebianco drew a walk to start the fourth inning rally. Panebianco stole second and scored on an error when Aiden Zimmerman’s ground ball was unable to be fielded cleanly. Dom Allegretto followed with a walk, the duo stole second and third and both scored on Camron Marciniak’s sharp single up the middle. Ethan Wells capped the inning with an RBI double.

Marciniak talked about the win

That gave Johnsonburg a 7-2 advantage that ECC wasn’t quite able to recover from. The Crusaders cut the lead to 7-3 on an error in the bottom of the fourth and scored two more in the sixth on RBI singles from Tommy Slay and Luke Ginther.

Zimmerman tossed a 1-2-3 seventh inning to shut the door and preserve the win for Johnsonburg.

Wells also had two RBI and Allegretto one

DUBOIS, Pa. – Jordan Ell’s bases-loaded single with no outs in the bottom of the seventh gave DuBois a walk-off 7-6 win over Brookville at Showers Field.

Ell lined a pitch into left field to score courtesy runner Davey Aughenbaugh, who replaced Nate Tyler after his leadoff single. Brycen Dinkfelt singled into right field and both moved up a base on a wild pitch thrown by Bryce Rafferty. The Raiders intentionally walked Alex Pasternak before Sell’s game-winner.

The Raiders tied it at 4-4 in the fourth, taking advantage of three walks and getting a two-out three-run double off the center-field fence from Hunter Geer. The Raiders went up 5-4 on Bryce Rafferty’s two-out single in the fifth inning.

DuBois re-took the lead at 6-5 with two runs in the bottom of the sixth. With one out, Kaden Clark doubled in Ell who led off with a single and scored on Billy Gray’s two-out double.

But the Raiders tied it in the seventh when Jamison Rhoades led off with a double to left-center and scored on Griffin Ruhlman’s one-out single.

Tyler Chamberlin got the win in relief of the Beavers’ starter Dinkfelt, giving up a run on three hits in the final two innings. Dinkfelt allowed six hits and five walks in three innings.

Tyler, Dinkfelt, Ell, and Clark each had two hits for the Beavers.

Rafferty took the loss for the Raiders, giving up four hits and a walk with a strikeout in 2/3 of an inning. Geer threw the first 5 1/3 innings, giving up two walks, six runs, and six hits while striking out two.

Spencer Hoover hit a home run, Jake Mullins had a pair of doubles, and Rowles and Chris Fegert each doubled to pace the Golden Tide offense.

Hoover’s home run was a grand slam, and he was 1-for-3 with two runs scored and four RBIs.

Troy Misiura took the loss allowing 11 runs, nine earned, on eight hits, two walks, and a hit batter while striking out one in 1 ⅔ innings. Tanner Holes gave up an earned run on two hits and a walk while striking out three in 3 ⅓ innings of relief.

Carter Price hit a home run for St. Marys while going 2-for-2 with a run scored and an RBI, and Conner Bullers was 1-for-3 with a double.

Ryan Gearhart got the win going seven innings allowing three earned runs on four hits and three walks while striking out eight. He hit a batter.

BROCKWAY, Pa. – Breaking up a semi-close game with six runs in the seventh, Karns City picked up a 12-2 road win over Brockway.

Mallick Metcalfe paced the Gremlins going 3-for-4 with a double, two RBIs, and three runs scored.

Andrew Brubaker was 2-for-3 with a run scored for Brockway.

Michael Neff got the win going seven innings giving up two earned runs on five hits and a hit batter while striking out four.

Ezra Swanson took the loss going two innings giving up six runs, three earned, on six hits and a hit batter. He struck out one.

Adamoski pitched 1 ⅓ innings giving up one hit while striking out two.

Brandon Higley scored three runs for Smethport going 1-for-3 with a walk, while Alex Cole was 2-for-4 with a run scored and two RBIs. Noah Lent added a double, a walk, and a run scored, and Travis Cooney was 1-for-2 with a double, two walks, and two runs scored.

Ty Guilds was 1-for-2 with a walk for Port Allegany.

Ian Dynda pitched 1 ⅔ innings giving up three earned runs on five hits and three walks while striking out one, and Payton Spencer went a scoreless inning walking two and striking out one.

Michael Gow was 1-for-1 for Bradford with Elijah Finton being hit by a pair of pitches while scoring a run.

London got the win going three innings allowing one earned run on one hit and two hit batters while striking out five.

DUBOIS, Pa. — Trying to finish their suspended game from Monday at Showers Field, Brookville and Elk County Catholic picked things up with two outs and the Raiders batting in the top of the second inning.

They couldn’t get it finished as Elk County Catholic left Showers Field at 3:12 p.m. to get to their other scheduled game against Johnsonburg at Berwind Park, which started around 4:40 p.m. The resumed game at DuBois started around 1:40 p.m.

Since weather or poor field conditions didn’t result in the game stoppage, the game remains suspended and it’s likely that it could be completed on April 25 when the Raiders visit Berwind Park to face St. Marys.

Jamison Rhoades has gone all six innings so far on the mound for the Raiders with seven strikeouts and six hits allowed. At the plate, he’s doubled, singled, and scored a run while Carson Weaver, Griffin Ruhlman, and Owen Caylor each have two hits. Hunter Geer, Weaver, Ruhlman, and Caylor along with Rhoades all have doubles.

April 13, 2022 D10 Baseball: Thompson, Slippery Rock Blank Meadville; Grove City Walks Off
April 14, 2022 D9/10 Baseball/Softball Schedule Powered by the BHL Sportsperson of the Year Award
This website or its third-party tools process personal data.In case of sale of your personal information, you may opt out by using the link Do not sell my personal information.
×
Manage consent