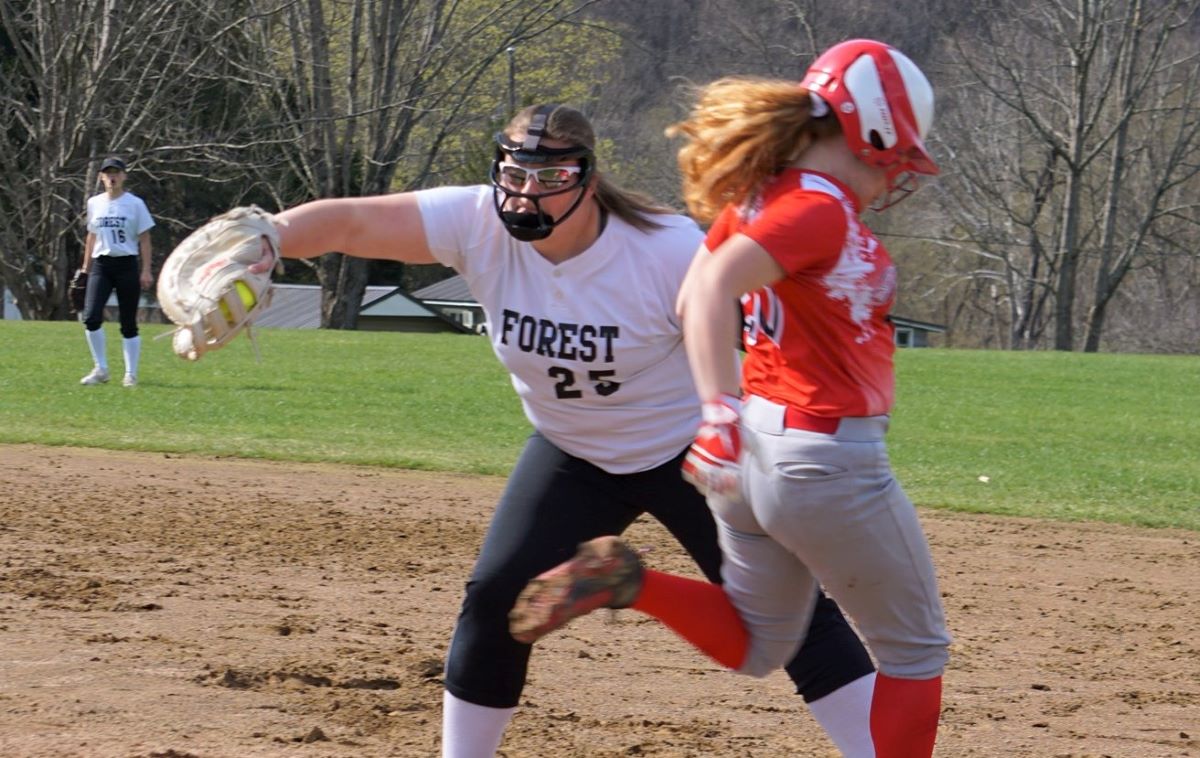 Maggie Boehme added a pair of hits and an RBI for the Fires, while Emma McFarland had two hits. Faith Dietrich and Chaise Siegel each chipped in doubles, and Amber Guzzi drove in a pair of runs.

Kia Sage hit a 3-run home run for Redbank Valley, her second home run in as many days, while Teja Hageter had a pair of hits and an RBI and Brooke Holben had a triple and an RBI.

Natalie Meyers pitched a complete game allowing seven runs on eight hits and two walks while striking out one.

Young struck out 15 while walking two.

Helping her own cause, Young hit a three-run home run in a four-run fourth inning.

Brianna Grotzinger added a triple for St. Marys with Kara Hanslovan chipping in an RBI.

Johnston helped herself by going 2-for-3 with two runs scored.

DUBOIS, Pa. – Jessy Frank went 3-for-3 with a walk, three runs scored, and three RBIs to help DuBois Central Catholic to a 19-0, four-inning win over Brockway at Heindl Memorial Field in DuBois.

DCC, the visiting team in the contest, also got three hits each from Chelsea Busatto and Melia Mitskavich.

Busatto was 3-for-4 with a triple, two runs scored, and two RBIs, while Mitskavich went 3-for-3 with a run scored and an RBI.

JOHNSONBURG, Pa. – Winning pitcher Julia Jones threw a one-hitter and was 2-for-3 with a double, a walk, two runs scored, and an RBI in a 10-0, six-inning win for Johnsonburg over visiting Kane.

Jones struck out 12 in her six innings of work.

Jenna Kasmierski was also 2-for-3 for the Ramettes, while Alexa Mahoney was 1-for-4 with a run scored and two RBIs.

The Beavers had only five hits but led 6-0 after four innings before the Chucks scored one in the fifth and four in the sixth and had back-to-back singles but had the first runner caught stealing/picked off.

Trenton Gaffney and Brycen Dinkfelt were both1-for-2 with a double, a walk, and two runs scored for the Beavers.

Isaac London was 3-for-3 with a walk and an RBI for Punxsutawney, while Dakota Long was 3-for-4 with a double and a run scored, Alex Phillips was 2-for-4, and Zeke Bennett was 2-for-3 with a triple and two runs scored.

DUBOIS, Pa. – Kaden Brezenski went 2-for-4 with a run scored and three RBIs to lead DuBois Central Catholic to an 8-2 win over visiting Brockway.

Dante Armanini was also 1-for-2 with a double, two walks, two runs scored, and two RBIs to help the Cardinals with Matt Pyne and Damon Foster each scoring twice.

Matt Brubaker was 2-for-3 with a walk and a run scored.

Connor Ford took the loss going 4 ⅓ innings allowing six runs, all earned, on six his and six walks while striking out four.

Bonanno was 1-for-4 with a run scored and two RBIs, while Cam Wagner was 2-for-3 with a double, an RBI, and three runs scored for the Bulldogs.

Also for Redbank Valley, Jimmy Gundlach and Bryson Bain were both 1-for-3 with two runs scored and Ty Hetrick was 1-for-2 with a double, two runs scored, and two RBIs.

Wagner got the win going four scoreless innings allowing four hits and a walk while striking out one. Richie Leasure pitched a scoreless fifth striking out two.

Aidan Hartle took the loss going 1 ⅓ innings allowing two runs, one earned, on a hit and a walk while striking out two.

ST. MARYS, Pa. – Zach Miller and Landon Perry each had a pair of hits in Hollidaysburg’s 8-0 win at St. Marys.

Carson Kensinger and Bryce Martellacci combined on a two-hit shutout for the Tigers with Kensinger going six innings allowing two hits and a walk while striking out nine. Martellacci struck out one in his inning of work.

Connor Bressler took the loss going four innings allowing three runs, all earned, on five hits and four walks while striking out one.