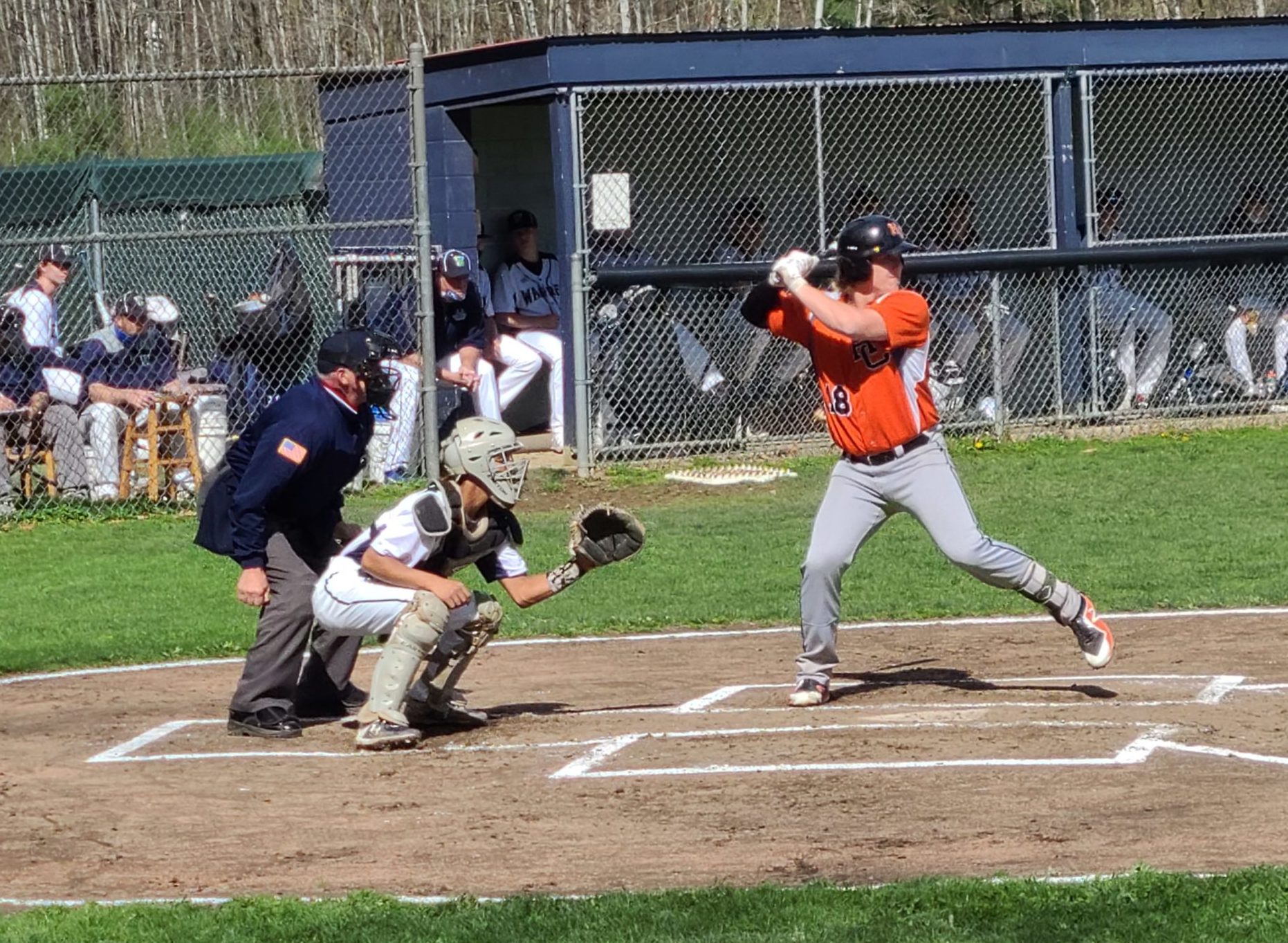 FRANKLIN, Pa. – Franklin scored all four of its runs in the fourth inning en route to a 4-2 win over Girard.

On the mound, Kyle Alexander tossed five shutout innings for the Knights to get the win, while Luke Guth pitched the final two frames.

Guth led the Knights with a pair of hits, while Carson Wible, Noah Kockler, Zach Boland, and Kadin Karns delivered RBIs for Franklin.

Austin Barrett took the loss for Girard, allowing eight hits over six innings, striking out three and walking one.

Aiden Balogh and Austin Shady drove in runs for the Knights.

FRANKLIN, Pa. – Walker Cunningham had a monster day at the plate, leading Cambridge Springs to a 16-6 victory over Rocky Grove.

Cunningham went 5-for-5 with two doubles and a home run, driving in a total of seven runs.

The Blue Devils collected 15 hits and tallied four runs in both the first and fourth innings and three in the second.

Brady Jardina also had a big day for the Blue Devils, going 3-for-5 and driving in three runs.

Caden Toscano had a pair of doubles and an RBI for Rocky Grove.

Isaac Clayton took the loss for the Orioles.

WARREN, Pa. – Leading just 1-0 after six innings, Harbor Creek exploded for seven runs in the seventh en route to an 8-0 victory over Warren.

Cody Smith was dominant on the mound, tossing 6 ⅔ shutout innings, allowing just three hits and striking out 13. He got out of a major jam in the bottom of the sixth, escaping a bases-loaded no-out situation unscathed thanks to a groundout and a pair of strikeouts.

Eli Moon delivered a sacrifice fly to break the scoreless tie in the sixth.

Warren’s Ethan Wilson was the tough-luck loser, allowing just the one run (which was unearned). He allowed just three hits.

Casey Smith and Austin Vaughn delivered 2-run singles for the Huskies, who took advantage of a pair of Warren errors in the frame.

NEW WILMINGTON, Pa. Jaret Boyer turned in a dominant effort for Wilmington in the Greyhounds’ 3-2 win over Lakeview.

Boyer struck out 10 and allowed just two hits and one walk, with both of his runs being unearned.

Rocky Serafino, Dom Serafino, and Issac Schleich all drove in runs for the Greyhounds.

Chase Hostettler delivered a solid start for Lakeview, allowing just one earned run on three hits, striking out one. `

CORRY, Pa. – Nathan Lesher had a big day for Corry in the Beavers’ 4-2 win over General McLane.

At the plate, he drove in all four of Corry’s runs, including a 3-run home run in the first inning that proved to be all the run support the Beavers needed.

Lucas Dyne pitched a pair of scoreless innings in relief, striking out four.

Eric Matthews took the loss for the Lancers, allowing four runs in his four innings of work, striking out four and allowing five hits and five walks. Simmons tossed a pair of shutout innings for GM.

FAIRVIEW, Pa. – Fairview scored five runs in the first inning on its way to a 10-3 win over North East.

Logan Fiolek had four hits for the Tigers, while Aiden Rubliotta had three RBIs and Aari Fox two.

Four different Fairview pitchers combined to strike out nine in the win.

David Gibson went 2-for-3 at the plate for North East.

WATERFORD, Pa. – Cooper Cousins and Sam Crowley both knocked in a pair of runs and Jackson Hower homered to help lead McDowell to a 9-0 win over Fort LeBoeuf.

The Trojans scored four runs in the first inning and never looked back.

On the mound, Dan Snyder and Anthony Manna were dominant for McDowell, striking out seven Bison each.

The Trojans collected a total of 13 hits in the win.

GROVE CITY, Pa. – Mason Jones was brilliant for Grove City, striking out 13 and allowing just three hits over six innings in a 9-0 victory over Meadville.

The Eagles plated a pair of runs in the first inning and three each in the fourth and sixth frames.

At the plate, Jones knocked in a pair of runs, as the Eagles took advantage of nine Bulldog walks and three errors.

ALBION, Pa. – Titusville scored 13 runs in the first inning on its way to an 18-1 victory over Northwestern.

Kolin Baker was one of a number of Rockets with a big day at the plate, going 3-for-3 with a double and five RBIs.

Hunter Titus drove in three runs for the Rockets drove in a pair, as did Derek Beach, who also tripled.

The Bears struck for three runs in each of the first two innings en route to the win.

Abby Tingley got the win, allowing five hits and one run while striking out eight.

MEADVILLE, Pa. – General McLane scored three runs in the third inning and three more in the fifth en route to a 7-1 victory over Meadville.

Samantha Herberg homered for the Lancers, while Bailey Cannon had two triples and an RBI, while Catrina Miller was 3-for-3 with two doubles and three RBIs.

Cannon earned the win, striking out 13 and allowing just three hits and one unearned run.

WEST MIDDLESEX, Pa. – Wilmington scored four runs in the fifth inning on its way to an 8-2 win over West Middlesex.

Taylor Dlugozima had two hits and drove in three runs for the Greyhounds, while Jadyn Flick drove in a pair.

Remington Koi and Flick combined to strike out eight in the circle.

Hess, Kelly, and Emalie Thomas all drove in runs in a 4-run sixth inning.

The Hornets racked up 18 hits in the win, with Carlie Miller, Alyssa Lenzi, Kendra Koerth, Kaelyn Fustos, Jaclyn Fustos and Hallie Miller with at least two each.

Miller and Lydia Hallas combined for three perfect innings on the mound, striking out five.

RUSSELL, Pa. – Eisenhower scored 12 runs in the fourth inning on its way to a 16-1 win over Youngsville.

The Knights took advantage of six walks in the inning and got hits from Taylor Napolitan, Julia Gesing and Phoebe Tower in the inning.

Delaney Chase tripled and scored a pair of runs for Eisenhower.

The Knights also scored two runs in both the first and third innings.

Napolitan got the win on the mound, striking out seven.

Blauser Sets ACV Long Jump Record; Sheffield Takes 3 of 4 at Oswayo Valley
April 13, 2021 D9 Baseball/Softball: Forest Area SB Tops Redbank Valley; St. Marys, Punxsy SB Get Shutouts; DuBois BB Edges Punxsy
We use cookies on our website to give you the most relevant experience by remembering your preferences and repeat visits. By clicking “Accept All”, you consent to the use of ALL the cookies. However, you may visit "Cookie Settings" to provide a controlled consent.
Cookie SettingsAccept All
Manage consent