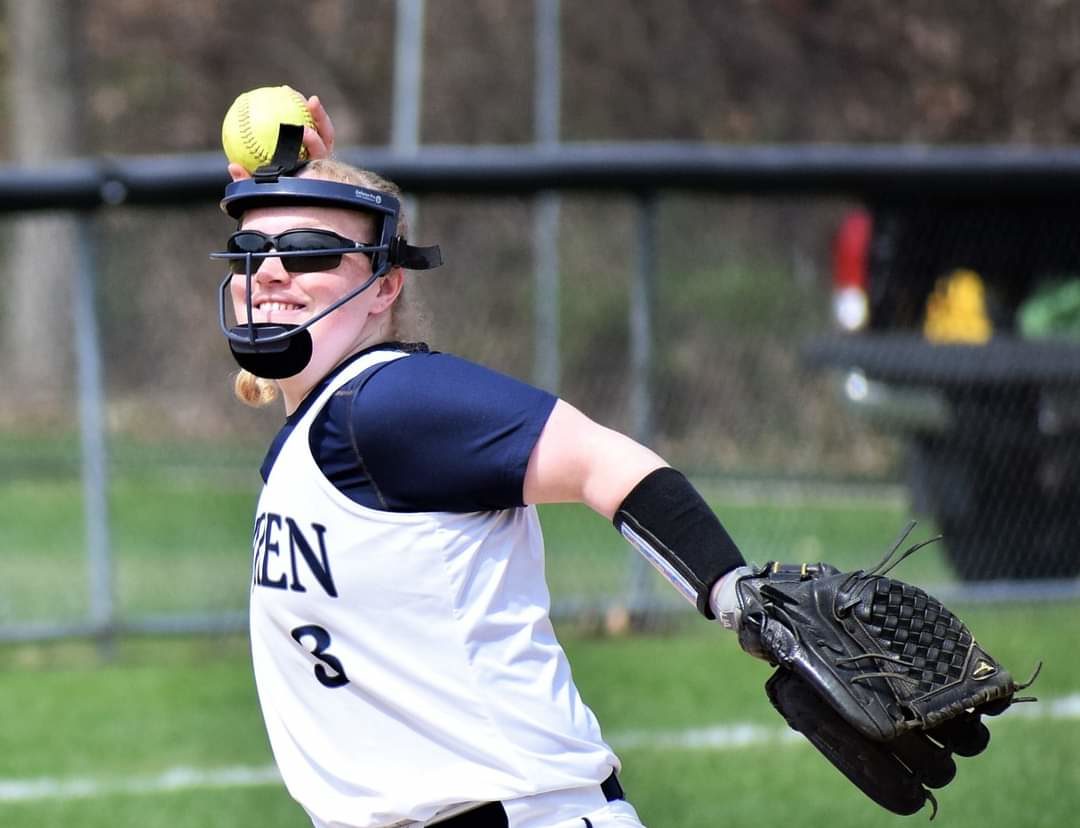 WARREN, Pa. – Warren swept a doubleheader from Cranberry on Saturday, 14-2 in 5 innings in Game 1, and held off a furious  Berries’ rally for an 8-7 triumph in Game 2.

The Dragons scored early and often in Game 1, scoring three runs in each of the first two innings and seven in the fourth.

Alix Lytle belted RBI doubles in each of the first two innings for Warren, with Alex Neureiter also notching an RBI double in the first.

Carly Beers, who went 3-for-3, started the second inning with a single and Kelsey Stuart and Lytle had run-scoring hits in the frame.

Stuart had a strong start in the circle, striking out nine in the complete-game victory.

In the fourth for Warren, Lexi Hoffman and Beers had RBI hits, as three Dragons reached base via hit-by-pitch in the frame.

Katie Madigan capped the inning with a 2-run single.

Laiyla Russell had a 2-run double in the first inning for Cranberry.

In the second Game, Warren raced out to an 8-1 lead.

Madigan had a hit to lead off the game and came around to score on a groundout from Stuart. The Dragons struck for three runs in the second on an RBI single from Neuretier and a 2-run single off the bat of Halle Kuzminski.

Warren plated three more runs in the fifth, with the big hit coming in the form of a 2-run single from Beers.

Trailing 8-5 going into the bottom of the seventh, a Maria Anderson double plated Olivia Plummer and Rylee Coe’s RBI single made it 8-7 with two outs.

Coe advanced to second on the throw home, but Stuart left the tying run stranded, getting a strikeout to end the game.

Kuzminski and Beers had two RBIs apiece for Warren and Madigan, Stuart, Neureiter and Miken Beers one each.

Jenna Reynolds had a pair of hits, including a double for Cranberry, while Plummer scored a pair of runs.

Stuart was the winning pitcher, while Jenna Biltz took the loss.

HADLEY, Pa. – Reynolds scored six runs in the first inning, seven in the second, and eight in the fourth en route to a 22-6, 4-inning victory over Commodore Perry.

Ella Aring led the charge for the Raiders, homering and driving in four runs. Chloe McLaughlin drove in three runs for Reynolds, while Marissa Hilyer, Mackenzie Herman, and Lea Miller drove in two each.

FAIRVIEW, Pa. – Jenna Hanas went 2-for-3 with three RBIs to help lead Fairview to a 5-2 win over Harbor Creek.

Hanas, Chole McManus, and Julia Golden each had RBIs in the 3-run third inning, as Fairview extended its lead to 4-0 after Hanas’ RBI single in the first.

In the circle, Hailey Komisarski got the complete-game victory, allowing just two hits, walking five, and striking out five.

Maura Benim drove in both runs for Harbor Creek.

Haiden Manning went the distance for the Huskies, allowing eight hits and striking out five.

GIRARD, Pa. – Girard scored eight runs in both the first and third innings on its way to an 18-3, 4-inning victory over Iroquois.

Courtney McDonald had a big day at the plate for the Yellow Jackets, hitting a triple, going 3-for-4, and driving in four runs.

Alayzha McCray and Jenna Dash had two hits apiece for the Braves.

Hallie Miller had a big day for the Hornets, going 2-for-4 with a home run and four RBIs. She was also the winning pitcher, allowing three earned runs and striking out five.

Courtney Saylor and Amanda McNabb both hit home runs for the Eagles, with Saylor driving in a pair.

WATTSBURG, Pa. – Trailing 6-3, Seneca scored six runs in the fifth inning on its way to a 9-6 victory over North East.

Meghan Konkol finished 3-for-3 at the plate to lead the Bobcats, while Anna Malinowski doubled and drove in three runs.

SHARON, Pa. – Ella Connelly’s RBI single in the sixth inning gave Sharon a 5-4 lead on its way to a 7-4 triumph over Titusville.

Iresha Norris had a strong day at the plate for the Tigers, going 2-for-4 with two RBIs.

WEST MIDDLESEX, Pa. – Slippery Rock scored four runs in both the third and seventh innings, rolling to a 12-3 win over West Middlesex.

Sam Meredith doubled, part of a 3-for-4 effort that saw her drive in four runs.

Meredith D’Antoni, Mackenzie Hartley, and Caitlin Kunsman all had two hits for the Rockets. D’Antoni drove in a pair of runs.

ERIE, Pa. – A 4-run third inning proved to be all Harbor Creek needed in a 4-2 victory over Cathedral Prep.

Casey Smith belted a 2-run double in the frame, followed by an RBI single off the bat of Gio Barbato and a sacrifice fly from Cam Miller.

Aidan Kelly was dominant on the mound, striking out 10 and allowing six hits in his 5 ⅓ innings of work. Austin Vaughn got the save, tossing 1 ⅔ innings, recording all five of his outs via strikeout.

Prep scored both of its runs in the sixth, courtesy of a 2-run triple off the bat of Pat Sullivan.

Andrew Malec took the loss for the Ramblers, allowing four runs on three hits and five walks in his three innings of work.

The Dragons struck for a pair of runs in the first inning, courtesy of  Micah Passmore’s RBI triple and an RBI groundout off the bat of Ben Berdine.

Berdine made it 3-0 in the third with his double plating Passmore. Alex Borger followed with a 2-out, 2-run triple, bringing in Berdine and James Swanson.

Trailing 6-0, the Royals plated a pair of runs in the bottom of the third by way of Braden Lazar’s 2-run double.

Kevin Fuentes belted an RBI double in the fifth for the Royals and Jose Quinones drew a bases-loaded walk.

A Juan Ramos groundout made it 7-5 in the sixth.

Archie Teconchuk shut the door for the second time in as many games for the Dragons, tossing two hitless innings.

Warren scored its seventh run of the game courtesy of a Gio Elinsky RBI single. Elinsky and Borger had two hits apiece for the Dragons, while Fuentes had two hits for the Royals.

NORTH EAST, Pa. – Aden Bulger had a big day both on the mound and at the plate, helping lead North East to a 10-0, 5-inning win over Seneca.

In his complete-game victory, Bulger retired 13 of 15 batters via strikeout while allowing just two hits, throwing 56 of his 75 pitches for strikes. At the plate, he was 3-for-3 with a double and a pair of runs scored.

Brandon Perez belted a 3-run home run in the third inning for the Grapepickers.

Reid Courtwright, David Gibson, Owen Kemp, and Andrew Aspden all drove in runs in a 4-run fifth inning. Gibson a pair of hits in the game.

SHIPPENVILLE, Pa. – Scoring 15 of its 17 runs in its final three at-bats, visiting Franklin rallied from a seven-run deficit after four innings to beat Clarion, 17-12.

The Knights trailed 9-2 after the fourth and 11-6 after the fifth before plating six runs in the sixth and five more in the seventh.

Carson Wible homered and doubled for Franklin and drove in six runs. He was 3-for-5 and scored three runs. His two-run double in the sixth got the Knights within a run at 11-10, and he then scored the tying run on two-run single by Cole Harmon that gave Franklin the lead, 12-11. He then hit a three-run home run in the seventh to extend the lead to 15-11.

Wible, Franklin’s third pitcher, got the win going 2 ⅓ innings allowing one earned runs on a hit and two walks while striking out one.

Clarion used six pitchers with Daunter Girvan, the fourth hurler, taking the loss. He went a ⅓ of an innings giving up four runs, three earned, on two hits and two walks.

Tanner Miller gave up three runs, all earned, on two hits and three walks in a ⅓ of an inning.

Smail was charged with three earned runs on two hits, a walk, and a hit batter while striking out one in an inning of work, and Craddock pitched ⅔ of an inning giving up two unearned runs on a hit and two walks.

HERMITAGE, Pa. – Joey Fazzone and Luca Bertolasio both homered and drove in three runs each to lead Hickory to a 10-4 victory over Mercer.