A Year in the Making: Keystone Girls Win 2A Title a Year After Finishing Second 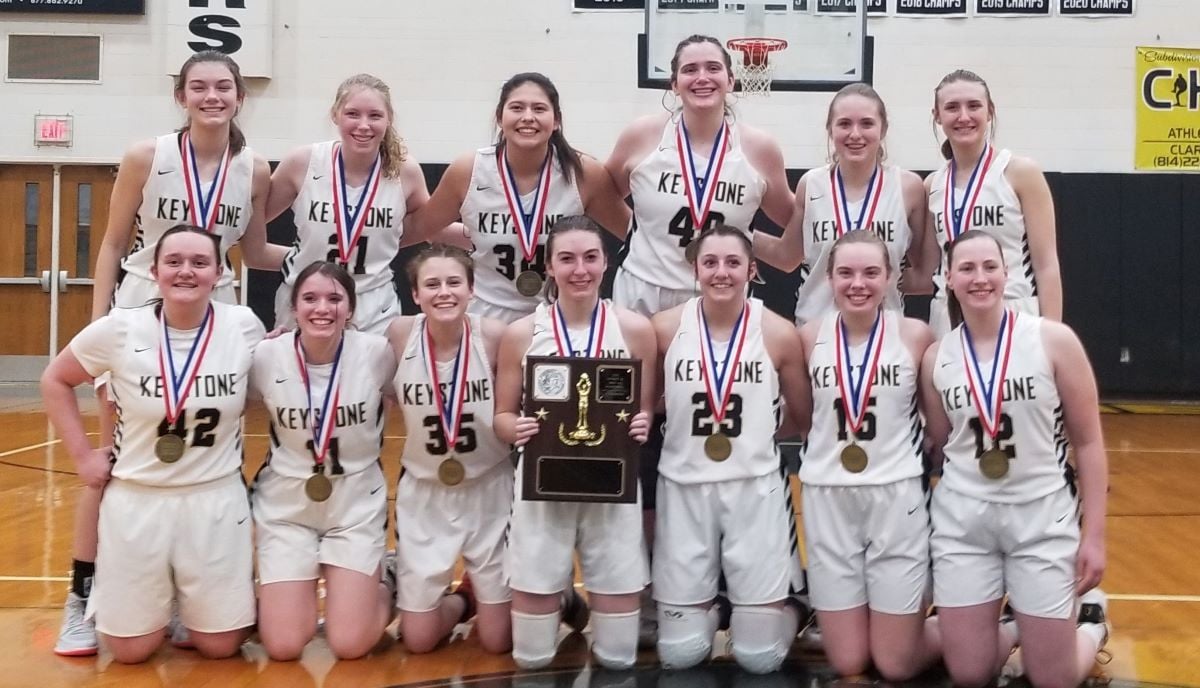 After falling just shy of the District 9 Class 2A girls basketball championship in 2020, Keystone took the next step Friday night with a 42-31 victory over visiting Brockway to claim the 2021 D9 Class 2A title. It is the Lady Panthers’ first District 9 championship since winning Class 1A in 2016 and their fourth all-time (2012, 1978).

“It feels really good,” junior Jozee Weaver said. “I watched my sisters win one of these when I was younger, so it is really exciting that I get to win one.”

For senior Emily Lauer, it was the culmination of years of hard work with her fellow senior starters – Maddie Dunlap and Danae Hurrelbrink.

“It is so great,” Lauer said. “We have been wanting this ever since we started playing. To get this our senior year, with COVID, we are so grateful we got to do that.”

Keystone (19-2), the top seed, won the way it has won so often this season. With defense.

The Lady Panthers limited Brockway to 28.6 percent shooting (12 of 42), including 1 of 13 from 3-point range, and turned the second-seeded Lady Rovers (11-7) over 17 times, including seven in a critical third quarter that saw Keystone take a four-point, 20-16, halftime lead and turn it into a 32-21 advantage going to the final eight minutes.

Offensive coming and going would be the best way to describe Friday night for Keystone.

The Lady Panthers actually shot the ball worse than Brockway – 28.2 percent (11 of 39) but turned it over just eight times and got to the free-throw line 22 times, making 17, which was the difference in the game.

“We weren’t shooting very well,” Almes said. “But, we felt very confident we could get to the free-throw line on this team. We felt we could get the first step, get around their hips. What this team has done over the past year that has really put us here is our passing and our decision-making. We were able to space Brockway out and get easier passes. When the ball is not dropping, you have to respond on defense and you have to respond with rebounding. I feel like the girls took care of that tonight.”

Keystone led wire-to-wire after Weaver hit a 3-pointer 35 seconds into the game to give the Lady Panthers’ a 3-0 lead.

Weaver and Natalie Bowser both played critical roles in the scoring department for Keystone, as Brockway concentrated on shutting down Lauer, the Lady Panthers’ leading scorer.

“This team is great,” Lauer, who despite getting a lot of the attention still scored a game-high 15 points thanks to a 7 of 8 performance at the line, said. “Everyone can shoot. Everyone can play defense. There is no doubt in my mind that if I pass it to anyone, they can put it in the hoop. I am grateful for that.”

Weaver and Bowser each added 11 points with seven of Weaver’s coming in the first half to help Keystone to the four-point halftime lead.

“They put a lot of pressure on Emily,” Weaver said. “She is our best player. I know that sometimes I need to get the ball and get some threes and drive in and dish it to Nat sometimes and stuff like that.”

Even with Weaver playing well in the first half, Brockway hung around thanks to the play of Danielle Wood.

The diminutive but quick guard scored eight of her team-high 14 points in the first half, and that plus buckets from Nikki Baker and Selena Buttery in the final 1:07 of the half had Brockway in position to pull the upset at halftime.

Keystone, though, started the second half on an 8-2 run to gain the separation it needed to take home the championship.

The run was fueled by steals from Weaver and Lauer and was all part of the halftime adjustments made by Almes and his assistant coaches, Paul Flickner and Tori Swartzfager.

“We had to create more points off turnovers,” Almes said. “We average 25 steal a night. Brockway was doing a good job spacing us out, making us kind of second-guess ourselves with some of the passing lanes. (At halftime) we just told the girls attack, attack, attack on defense, get aggressive, do what we do well, od what put us here. The kids responded to that. That third quarter really changed the pace for us.”

Lauer added five steals, four rebounds, and a blocked shot to her 15 points, while Bowser had a double-double by adding 10 rebounds to go with her 11 points and she also blocked three shots. Weaver chipped in six rebounds, four steals, and two blocks, and Keystone ended the game with 11 steals, including seven in the third quarter.

Wood added four rebounds, three steals, and two blocks for the Lady Rovers, while Buttery had 11 points, 12 rebounds, a steal, and a block. Madelyn Schmader also grabbed 11 rebounds for Brockway and had two steals.

Keystone moves into the first round of the PIAA playoffs where it will host the District 5 champion Windber, a 44-29 winner over Tussey Mountain, Tuesday, March 16. The winner of that game will then travel to the WPIAL champion, Neshannock Friday, March 19, in the quarterfinals.

“It was really hard with COVID, but we are really glad we got a season,” Weaver said. “We were going and shooting around as much as we could even when we couldn’t practice. There was a lot of hard work put into this.”