A Title For The Ages: Redbank Valley Girls Beat Brockway In Shootout For First D9 Crown in Program History 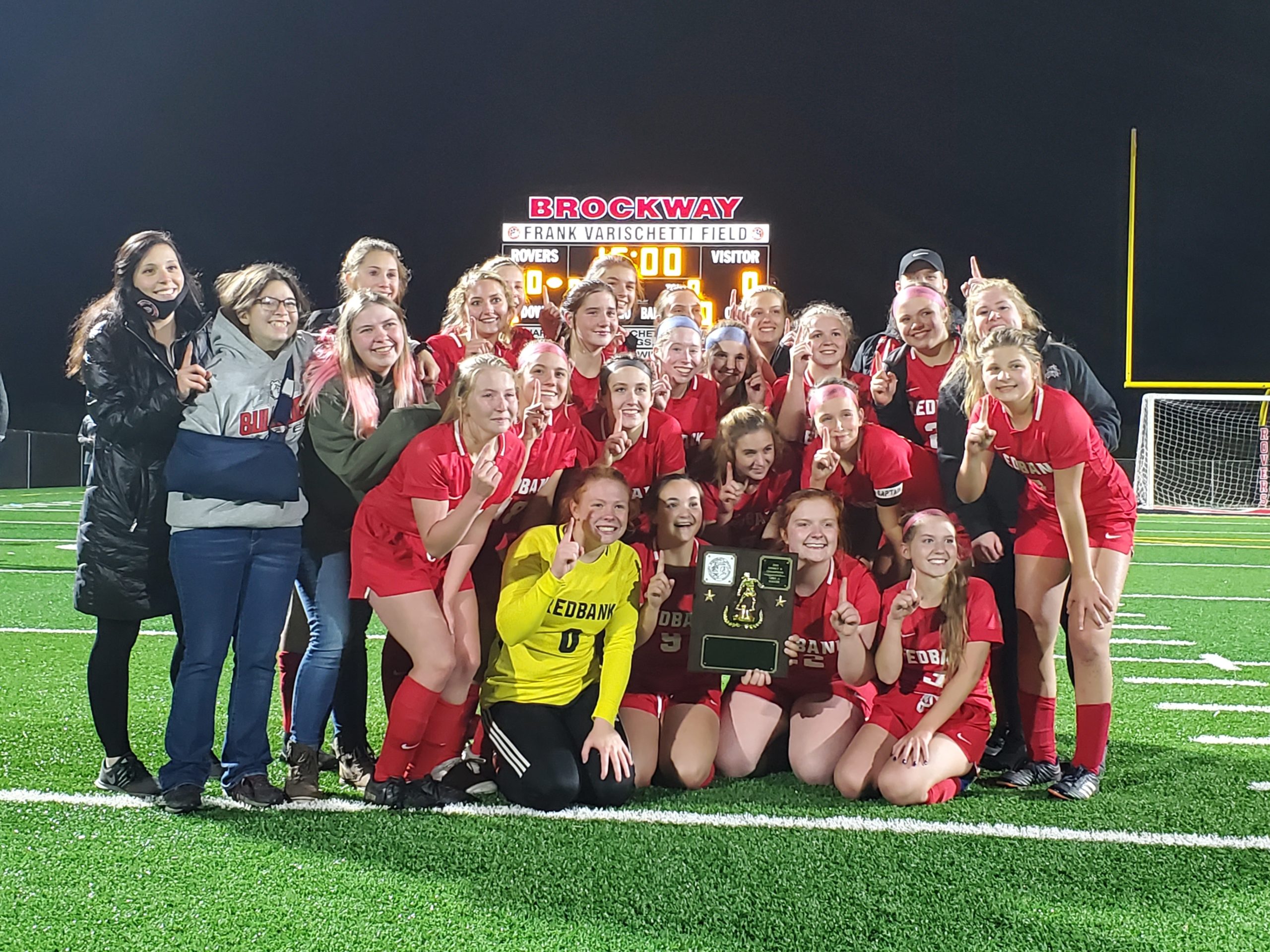 BROCKWAY, Pa. – They’ll be talking about this one in New Bethlehem for a long time.

In search of its first District 9 title in program history, Redbank Valley battled Brockway for 110 minutes without a decision on Wednesday.

When two overtimes weren’t enough, the squads went to penalty kicks to determine the champion, and Bulldog keeper Gabby Dinger played the role of hero, turning away all four Brockway shots, while Rhiannon Laughlin and Teja Hageter put away their PK’s to lift Redbank to the 1A crown.

“I’ve had these seniors since seventh grade when I was junior high coach,” Redbank Valley coach Mike Dawson said. “I told them if they stuck together and worked on their game, by the time there seniors they’d be alright. And that’s what they did. All the hard work they’ve put in paid off for us today.”

The Bulldogs pushed the pace in the two 15-minute overtime periods. Alexandra Shoemaker made several nice runs that turned into quality scoring chances for the Bulldogs (16-3), but they weren’t able to push across the game-winner.

It was only fitting in a game that was so evenly played went to penalty kicks to determine a winner.

“When it came to PKs, we start working on them about a month before the playoffs,” Dawson said. “The girls looked at me and said ‘this is why we work on them.’ I said ‘absolutely.’ Just in case it gets to a situation like this.They stepped up and knocked the shots in and Gabby absolutely killed it to get those stops at the end.”

So what kind of strategy is involved with pulling off what Dinger was able to accomplish?

“Guess right,” Dawson said simply. “Either you guess right and make a save or guess wrong and look kind of stupid. She looked great. This is just her second year starting and she came through in a big way.”

Dinger and the Redbank defense were nearly perfect, allowing Laughlin and the offense to strike late in the first half.

With 52.7 seconds remaining in the first. Laughlin, like she has done several times already this postseason, scored on a direct kick from the left wing to make it 1-0.

“Offensively, we knew we wanted to try to get direct, indirect or corners,” Dawson said. “We just wanted to get our offense the opportunity for those chances and Rhiannon knocked another one in.”

That goal may have stood if not for a fluky play less than three minutes of regulation time later.

Just 1:39 into the second half, Redbank was called for a hand ball in the box.

Delaney Wineberg took the penalty kick for Brockway (8-7) and beat Dinger, knotting the score at 1-1.

“We had momentum on our side,” Dawson said. “I’ll go to my grave thinking that ball hit of Teja’s (Hageter) face and not her arm.”

As much as Redbank controlled offensive possession in the first half, Brockway tilted the field in the second.

Still, however, the Rovers were unable to generate much in the way of scoring chances.

That had a lot to do with Quinn Fricko, who shadowed Brockway star Danielle Wood for most of the game.

“We really dive into film,” Dawson said. “We know most of their offense was to try and play long balls to No. 2 (Wood), so we had Quinn shading her most of the game there. Our defense played deeper than usual to take away those quick counters that they like. Quinn did a great job shutting her down.”

Gabby Dinger makes a save in the shootout. Photo courtesy Mike Maslar.

All of that led to the late-game dramatics that the Bulldogs wouldn’t have had any other way.

“Given the circumstances, with us having to travel here as the No. 1 seed, we love beating them here,” Dawson said.

And now they get to celebrate the second District 9 title for the school this fall, joining football, and with volleyball having a chance to join them on Thursday when they play Keystone for the Class 2A title.

It’s a good time to be a Redbank Valley Bulldog.