A Night for the Ages: Behind Susen, Miller, Wilmington Runs for 628 Yards in Win Over Chestnut Ridge 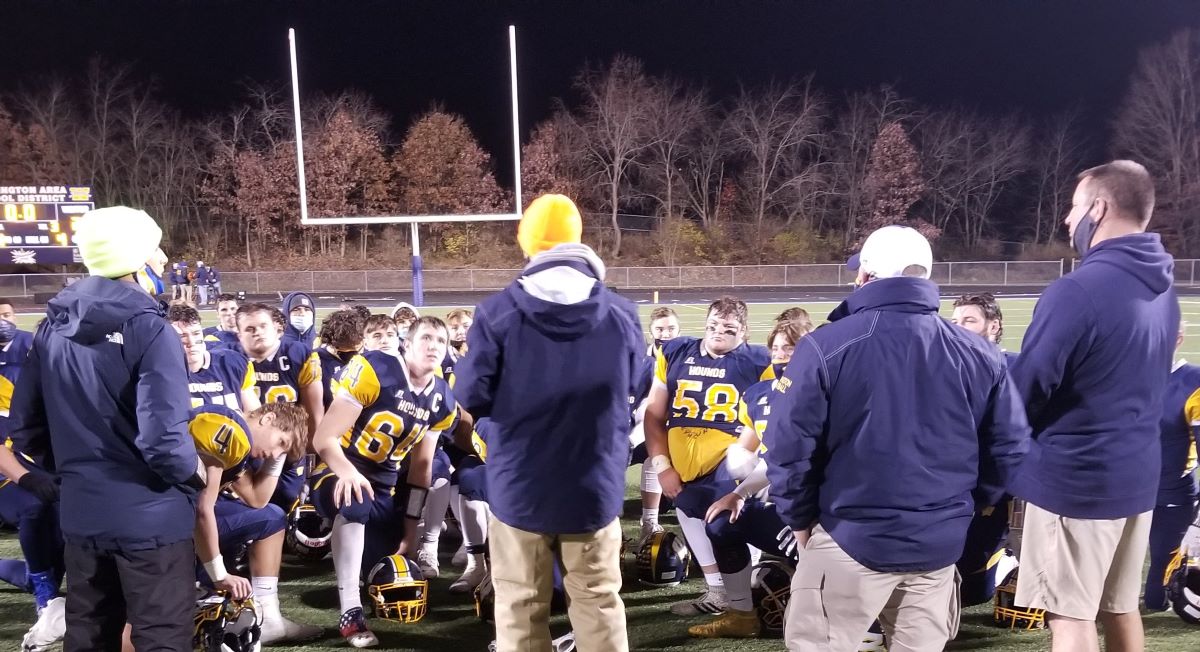 NEW WILMINGTON, Pa. – Led by one of the all-time greatest rushing performances in PIAA playoff history, Wilmington rolled into the PIAA Class 2A semifinals for the fifth straight season with a 56-29 win over Chestnut Ridge, the District 5 champion.

“I thought the key was winning the battle up front,” Wilmington head coach Brandon Phillian said. “I thought our offensive line from the start to the finish was fantastic tonight. It was just a great performance by the big boys upfront. It was really special.”

According to research done by long-time Mercer County radio personality Bob Greenburg, Wilmington’s rushing total may be the second-highest in PIAA playoff history behind only the 768 yards put up by Southern Columbia in the 2004 quarterfinals against Pius X. In addition, Susen may be the first back to ever rush for over 300 yards in PIAA Class 2A playoff game, and Susen’s six scores may make him one of just five players to score six touchdowns in a PIAA playoff game.

“Everything is an honor, obviously,” Susen, who went over 3,000 career yards in the contest, said. “But it doesn’t come from me. It comes from the coaches pushing us since our freshman year, since midget, going up all the years. It’s just a credit to our line. Our line worked super hard this week. We were getting low. Tuesday and Wednesday, we had one of the best practices of our lives. It showed today, the way our line pushed today.”

Watch Susen’s full interview after the game with Greenburg.

Miller, who ran for 181 yards in the second half alone – a half that saw the Greyhounds outgain Chestnut Ridge (7-3) 360 to 78 – echoed his coach and his backfield mate on the play of the offensive line.

“The offensive line is physical,” Miller said. “They are tough. They worked really hard. It starts with them, and then just having the backfield we have. Playing with (Ethan), playing with Luke (Edwards), having that dynamic backfield helps to keep the offense rolling. It’s awesome.”

A small tweak to the offense backfield might have been part of the reason Wilmington had one of the best nights – if not the best night – in school history on the ground.

Earlier in the week, with Edwards going to fullback and Miller to a wingback slot.

“We did that earlier this week,” Miller said. “I believe the rationale was that it was going to fit our strength moving Luke back to fullback. We felt it was going to help the offense run smoother. We kind of felt we were in a rut the last couple of games. We changed this year (putting Miller at fullback) thinning it would be better. It just wasn’t working out. We decided to go back and give what we were doing a year ago a shot. I think it panned out pretty well so far.”

Despite the final lopsided score and numbers – Wilmington outgained Chesnut Ridge 658 to 344 – the game was nip-and-tuck for a quarter-and-half with the score changing hands six times before the halfway point of the second quarter.

“It took (us) a while to settle in,” Phillian said. “Logan Pfister (the Chestnut Ridge quarterback) cost me a lot of sleep this week. I think early in the game, you could certainly see why. He’s a very talented quarterback, and he made plays with both his arm and his legs.”

Pfister and Matt Whysong helped the Lions take leads of 8-7, 15-14, and 22-21, in the first half with Pfister throwing a 29-yard touchdown pass to Whysong, Whysong running for a 46-yard score, and Pfister scampering in from 11 yards out.

Pfister finished the night 13 of 26 for 216 yards, two touchdowns, and an interception, why Whysong caught six passes for 79 yards and the score and ran the one time for 46 yards and the touchdown.

But as good as the duo was early on, the Wilmington defense got stronger and stronger as the game went on and limited Chestnut Ridge to just 83 yards on its final 28 plays after the Lions had gained 261 on their first 27 plays.

The change started when Morgan Whiting started finding a way to get pressure on Pfister causing the senior quarterback to rush his throws.

“One of the nicknames we have is ‘Playoff Morgan’,” Phillian said. “He always seems to save his best for playoffs. I thought he was just relentless all night long. He was relentless in his pressuring of the quarterback, but also he was very disciplined. Playing Pfister on the option requires a lot of discipline. They tempt you to take the bait. Morgan disciplined all night long. He’s our motor guy on defense. He’s got the highest motor. I think everybody would tell you that. That motor was certainly cranking and running on all eight cylinders here tonight.”

It was a big play from Edwards in the opening minutes of the game that helped set the tone for Wilmington.

Thanks in large part to a 60-yard pass from Pfister to Joe Gardner, Chestnut Ridge had the ball at the Wilmington 6-yard line on the game’s first drive.

But a would-be touchdown pass to Whysong was incomplete after Whysong lost his footing in the end zone on first down, and on second down, Pfister fumbled the football, and Edwards scooped it up and raced 91 yards to the house to give the Greyhounds an early 7-0 lead.

“When you look at the ebbs and the flows of the game, for us to get that first score was huge,” Phillian said. “I know we technically trailed after that score, the fact we were able to stay one score ahead, so to speak, I think was critical all night long.”

Chestnut Ridge was deterred by the early mistake and went 60 yards on nine plays scoring on the 29-yard Pfister to Whysong touchdown pass to get within a point, 7-6.

Then the Lions turned what should have been a botched extra point into a go-ahead 2-point conversion when Pfister tracked down a bad snap and threw a Hail Mary into the end zone that Whysong managed to catch while toe-tapping just inbounds in the back of the end zone for the conversion and an 8-7 lead.

After not running an offense play in the game’s first seven minutes, Wilmington quickly went back ahead, 14-8, on a 10-yard Susen run that ended a 9-play, 62-yard drive.

But that lead was short-lived, as Chestnut Ridge needed just two plays to go back in front on the 46-yard Whysong touchdown run that made it 15-14 Lions at the end of the first quarter.

Again Chestnut Ridge had the answer, as a 35-yard Pfister to Gardner pass set the Lions up at the Wilmington 12-yard line, and Pfister took it in from the 11 to give Chestnut Ridge a 22-21 lead with 7:02 left in the first half.

It took Wilmington just eight plays to go 78 yards for the answer and the lead for good when Susen broke free for a 45-yard touchdown run to put the Greyhounds up 28-22 with 4:38 to play in the half.

Wilmington’s defense then finally got the stop it needed.

After a 17-yard Pfister to Whysong pass put Chestnut Ridge at the Wilmington 39-yard line, the Greyhounds caught a break when Weyandt dropped what would have been a big gain over the middle on first down.

Then on second down, Whiting got pressure of Pfister to cause and incompletion, and on third down Pfister and running back Nick Presnell had some miscommunication on a handoff that ended up with Pfister keeping the ball and losing a yard to the 40.

Chestnut Ridge decided to go for it, and Pfister had Weyandt open down the near sideline by a couple of yards but overthrew him turning the ball over on downs.

It took Wilmington just six plays to expand the lead to double digits, 35-22, on a 2-yard run by Susen that came one play after quarterback Caelan Bender ran for 13 yards to the 2-yard line.

Bender, who hadn’t carried the ball prior to the drive, played a big role on the drive with three carries for 47 yards.

The Susen touchdown came with 58.7 seconds to play in the half.

Wilmington got the ball to start the second half and scored again, this time on a 4-yard Susen run, to make it 43-22 after a Susen 2-point run.

The drive took just six plays again with Miller breakin off runs of 35 and 11 yards, Bender adding an 11-yard scamper, and Susen a 10-yard tote.

Any real hope of a Chesnut Ridge comeback was dashed on the Lions’ next drive when they moved to the Wilmington 13-yard line where they faced a 3-and-1. But Presnell was stopped by Whiting for no gain on third down, and on fourth down Pfister was also dropped for no gain.

It took Wilmington just three plays to put the game away with Susen breaking free on a 57-yard run to the Chestnut Ridge 25-yard line and then scoring on a 35-yard run after a 10-yard penalty to make it 49-22 with 5:31 to play in the third quarter.

Chestnut Ridge got one final score, thanks in part to a 15-yard penalty on Wilmington, when Weyandt caught a 9-yard scoring pass from Pfister with 2:21 left in the third.

Wilmington, though, again answered, this time on a 28-yard run by Miller, who set up his scoring jaunt with a 42-yard carry. The touchdown came on the first play of the fourth quarter and ended the scoring on the night, as Wilmington drove to the 1-yard line on its final drive before kneeling three times.

The Greyhounds will face the winner of the WPIAL title game between Beaver Falls and Sto-Rox in the semifinals next weekend at either Beaver Falls or Sto-Rox. Wilmington is looking for its third trip to the state championship game in the last four years after falling to Avonworth in the PIAA semifinals last season.

“(Beaver Falls and Sto-Rox) are two incredible teams and two incredible programs,” Phillian said. “I’m sure they will battle hard (Saturday). Whoever comes out victorious will be an outstanding opponent. If you are blessed and fortunate enough to get to the Western Final, I think no matter who you’re matched up with is always going to be somebody very strong.”

NOTES – Wilmington is just the third team located in the western half of the Commonwealth to reach the PIAA football semifinals in five straight years joining Clairton (2008-12) and Farrell (2015-19) … If the Greyhounds have one area from Friday night they could clean up it is in the penalty department where they committed 11 for 117 yards.

Swaim, Bedford Too Much For Hickory in Class 3A Quarterfinals
Again! Oil City Earns Second Consecutive 1-Point Win To Advance To Class 4A Semifinals