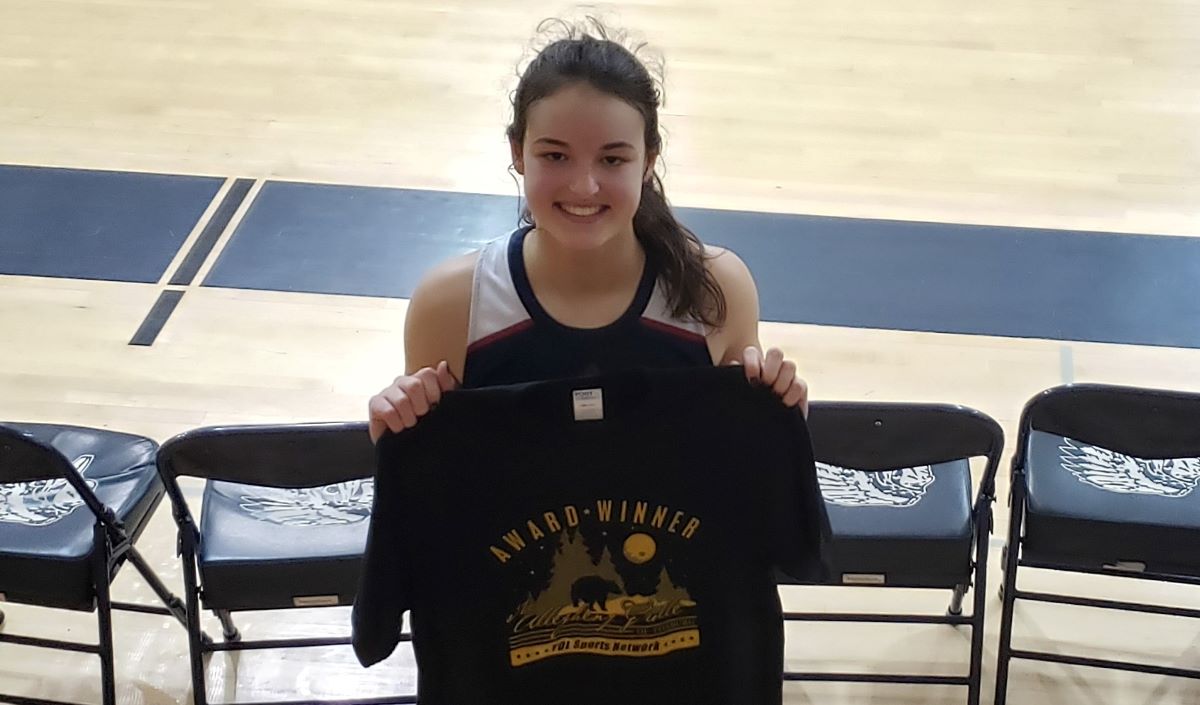 Faith Jacob helped DCC to the Brookville To. Title & was named the MVP of the tournament and the Allegheny Grille of Foxburg Player of the Game

Jacob, who was also named the Allegheny Grille of Foxburg Player of the Game talked about the win.

Using a triangle-and-two defense, DCC limited DuBois to 16 percent shooting (9-for-55) and took the lead for good at the end of the first quarter on a Jacob putback for an 8-7 lead. It led 22-11 at halftime and 24-16 after three quarters.

The eight-point lead going to the fourth quarter was key considering DCC didn’t score a basket in the second half until 4:20 was left in the game on a Jacob basket that actually pushed the Lady Cardinals’ lead back to 10, 28-18.

Madison Rusnica scored 10 points for the Lady Beavers and earned all-tournament honors as well but DCC kept Rusnica scoreless until the 4:31 mark of the fourth quarter when she hit a pair of free throws. Rusnica’s first bucket didn’t come until 3:21 was left in the game.

Maplewood outscored the Big Reds 19-12 in the fourth quarter en route to the win.

Sadie Thomas had seven of her 12 points in the fourth quarter for Maplewood, while Savannah O’Hara added 10 points.

Emma Mild had 21 points for West Middlesex, including a 10-of-13 effort from the foul line.

Maplewood will play Erie on Friday, while West Middlesex will play Conneaut.

PUNXSUTAWNEY, Pa. – For three quarters of its game against Hazleton in the Punxsutawney Christmas Tournament the hosts were in trouble.

Trailing 45-32 going to the fourth quarter, Punxsutawney rode the suddenly hot shooting of Danielle Griebel to an improbable 57-49 victory over the Cougars thanks to a 25-4 fourth-quarter advantage.

Griebel, who had been held to three points through the first 24 minutes of the game, hit three 3-pointers and scored 14 points in the fourth quarter to lead the Punxsutawney charge.

HADLEY, Pa. – Clarion-Limestone outscored Reyolds 18-4 in the first quarter on its way to 45-32 win over Reynolds at the Commodore Perry Tournament.

Alex Leadbetter led a balanced Clarion-Limestone effort with 12 points, nine of which came in the first half.

Lea Miller and Marissa Hillyer had nine points each for Reynolds.

LINESVILLE, Pa. – Aubrey Neavins poured in 20 points as Erie earned a 69-45 win over Conneaut in the CASH Tournament.

ST. MARYS, Pa. – Syd Alexander scored 13 points to lead Elk County Catholic to a 35-30 win over Ridgway in the opening round of the Elk County Tournament at St. Marys High School.

Samantha Straub and Lucy Klawuhn each added points for the Lady Crusaders.

ST. MARYS, Pa. – Jayssa Snelick led a trio of St. Marys players in double digits with 14 points to lead St. Marys to a 60-16 win over Johnsonburg in the opening round of the Elk County Tournament at St. Marys High School.

HERMITAGE, Pa. – Greenville jumped out to a 21-5 lead after the first quarter on its way to a 53-17 win in the Sally Ward Classic at Hickory.

Aaralyn Nogay added 16 points for Neshannock in the win.

MERCER, Pa. – Catherine Kelly and Allie Pry combined to score 24 of Moniteau’s 37 points in a 37-24 win over Sharon in the opening round of the Mercer Christmas Tournament.

Kelly led the Lady Warriors with 13 points with Pry adding 11.

FAIRVIEW, Pa. – General McLane outscored Seneca 14-6 in the fourth quarter to rally for a 36-33 in the Fairview Tournament.

Libby Opp keyed the rally for GM, scoring eight of her 18 points in the fourth quarter, including a pair of 3’s.

Brooke Miller added eight points for Northwestern in the win.

BESSEMER, Pa. – Lia Krarup poured in 30 points as Wilmington earned a split at the Mohawk Tournament with a 63-20 win over Deer Lakes.

Alyssa Flick added 10 points for Wilmington, which improved to 8-2 with the win.

BROOKVILLE, Pa. – Jumping out to a 14-0 lead, Brookville notched its first win of the year, 54-33, in the consolation game of its own Christmas Tournament.

Eden Wonderling, an all-tournament player, scored 22 points and finished with nine rebounds and four steals to pace the Lady Raiders. She was named the Allegheny Grille of Foxburg Player of the Game and talked about the win.

NEW CASTLE, Pa. – Hopewell outscored Grove City 16-9 in the third quarter en route to a 41-34 win over Grove City in the Laurel Tournament.

Lauryn Speicher led Hopewell with 15 points, 12 of which came in the second half, while Caylee Sunoy added six points.

Olivia Kulyk led the way for Mercyhurst Prep, pouring in 19 points on her way to earning all-tournament honors.

Lillirose Lang was also in double figures for the Lakers with 11 points.

MERCER, Pa. – Behind 13 points from Ashlyn Heckathorn, Mercer earned a 42-24 win over Ambridge in the opening round of the Mercer tournament.

Ava Godfrey added seven points for Mercer, which limited Ambridge to six points in the first half en route to the win.

Heroes for a Day: Fairview’s Murphey, Cameron’s Smith Give Their Teams Victories Dec. 29
Dec. 30, 2022 District 9 and District 10 Basketball Schedules Powered by Hunter’s Station Golf Club
This website or its third-party tools process personal data.In case of sale of your personal information, you may opt out by using the link Do not sell my personal information.
×
Manage consent