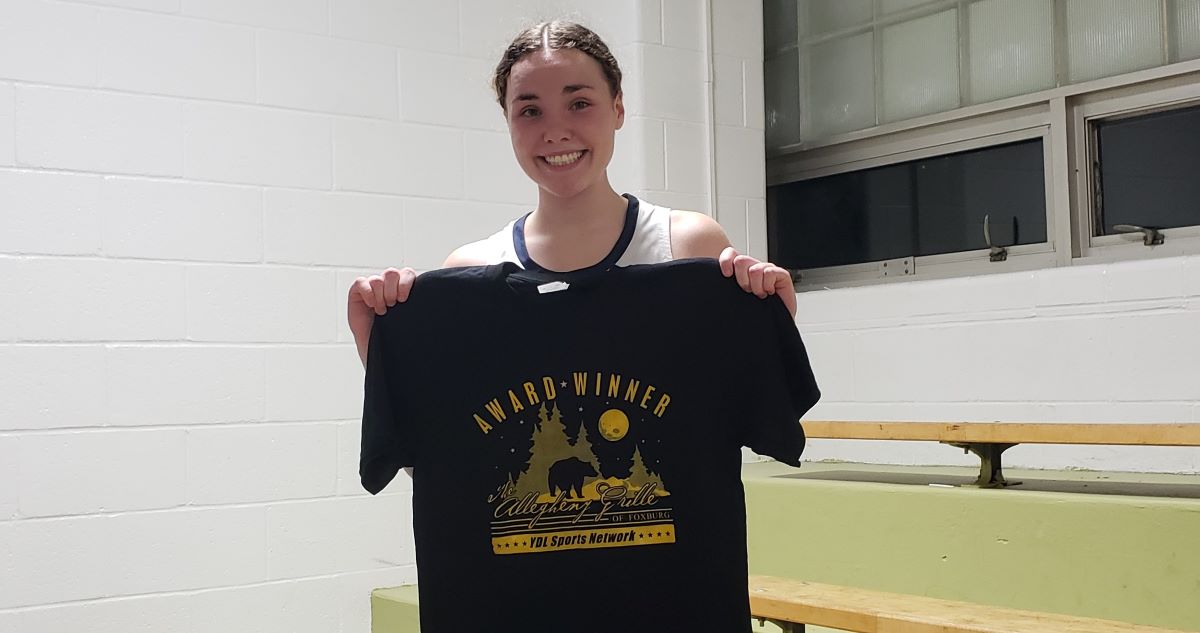 Alex Leadbetter helped lead a comeback win for C-L Thursday. It was the Lady Lions first win over Clarion since 2011. Photo by Chris Rossetti

STRATTANVILLE, Pa. – For the first time in 12 years, Clarion-Limestone found itself on the winning side of a girls’ basketball game against rival Clarion after a 33-31 nailbiter outside Strattanville Thursday.

A 13-4 run that started with under four minutes left in the third quarter and lasted until 17.1 to play in the game was the difference.

Sophie Babington got Clarion back within one on a 3-pointer with nine seconds left, and when Coull hit just one of two free throws with 6.8 to play the Lady Cats had a chance to tie or win the game

But Taylor Alston’s last-second shot from just inside the arc at the top of the key fell short – it may have been topped by Samantha Simpson or Coull – giving C-L its first win over the Lady Cats since Jan. 4, 2011. Clarion had won 19 straight against its rival.

Fourth-quarter free-throw shooting was the difference.

C-L connected on 8 of 12 fourth-quarter charity shots while Clarion was just 2 of 6 from the line in the final eight minutes.

That included the Lady Cats missing four straight free throws between the 2:15 mark and the 1:07 mark that would have tied the game or given them the lead after Alyssa Wiant’s two charity shots with 2:49 to go gave C-L the lead for good at 29-28.

Alivia Diehl had given Clarion a 26-25 lead going to the fourth quarter when she hit a pair of charity shots with no one else around her after being fouled at the third-quarter horn.

The fact those charity shots were needed to give Clarion the lead was a credit to C-L, which trailed 24-19 following a pair of Alston free throws with 4:08 to go in the third quarter.

The Lady Lions used a 6-0 spurt capped by an Alex Leadbetter basket with 1:04 to play in the third quarter. It was C-L’s first lead since 7-5 in the first quarter.

Leadbetter was the spark of the comeback scoring seven of her team-high 12 points in the third quarter. She was named the Allegheny Grille of Foxburg Player of the Game and talked about the win.

Wiant and Coull each added seven points for C-L, while Alston led Clarion with 12 points and Babington added nine.

SENECA, Pa. – Kendall Findlay and Jadyn Shumaker both scored 10 points to help Cranberry pick up a 38-22 home win over Union.

Alexa Schneider added 12 points for the Lady Dutch who also got nine from Jayssa Snelick and seven from Olivia Eckels.

EMPORIUM, Pa. – Rebecca Martin had a double-double to help Northern Potter to a 39-12 win at Cameron County,

Martin had 12 points and 10 rebounds.

All 27 of Sheeler’s points came in the first three quarters including 21 before halftime when the Lady Terrors built a 44-13 lead.

Elizabeth Hungiville had eight points and six rebounds for Smethport.

The Bison, whose triples outnumbered its doubles 13-9, got four 3-pointers from Andon Greslick and three from Cole Miller.

RIMERSBURG, Pa. – Visiting Cranberry built a 22-9 lead at the end of the first quarter on its way to a 68-55 win over Union.

Colin Zerbe scored 11 first-quarter points for the Berries or just three fewer than his season-high of 14 points he scored against North Clarion Wednesday night. Zerbe finished with 13 points.

Noel Bunyak then made sure the lead struck scoring 12 of his 16 points in the fourth quarter.

Ethan Merryman and Devin Zerbe both chipped in 11 points.