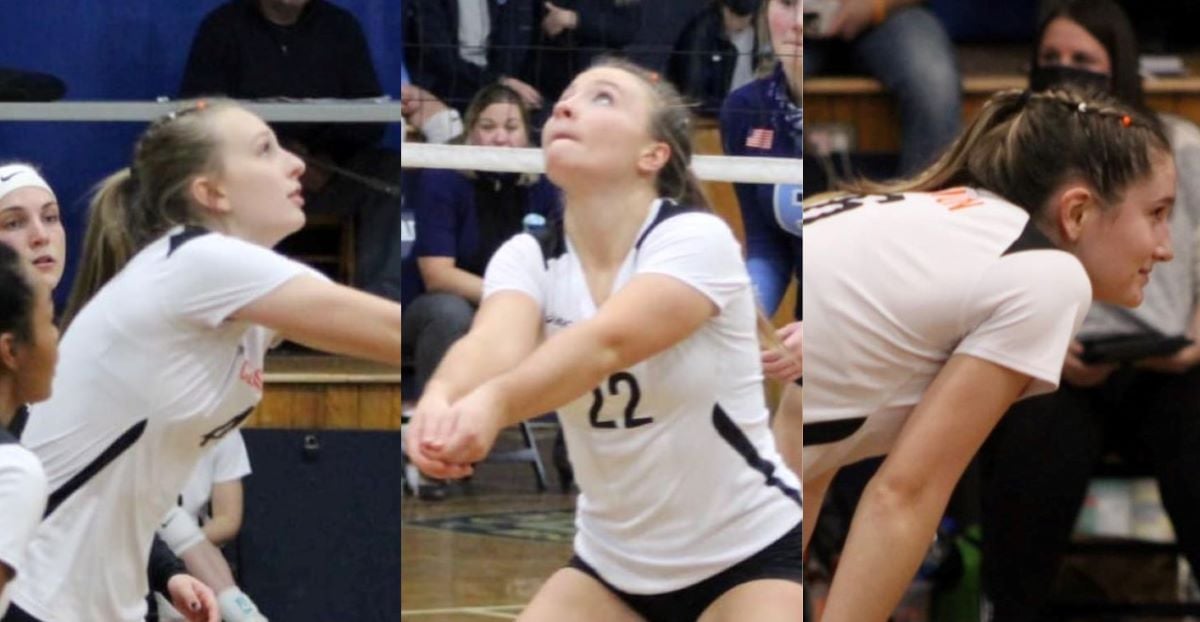 Korrin Burns (left), Brenna Campbell (center), and Erica Selfridge (right) all come from coaching moms and are a big reason Clarion is one win from a PIAA title. Photos by Nathan Girvan

CLARION, Pa. – One of the hidden strengths of the Clarion volleyball team, which is going for its second PIAA Class 1A title and its first since 2012, is its on-court awareness.

And a big reason for that on-court awareness is that three of the Lady Cats starters – senior setter Brenna Campbell, junior outside hitter Korrin Burns, and senior outside hitter Erica Selfridge – are all volleyball coaches’ kids.

Campbell’s mom, Shari, of course, is the ultra-successful head coach of Clarion Area, Burns’ mom, Jodi, served two stints as the head women’s coach at Clarion University, and Erica’s mom, Tami, was a coach in New York state winning a pair of state titles in 2017 and 2018.

“It’s a lot easier to play with coaches’ kids,” Brenna Campbell said. “I think coaches kids have a different sense of work ethic from the very beginning. I think playing with three coaches’ kids isn’t something you see a lot. They will always do everything to make sure the ball doesn’t hit the floor.”

Shari Campbell says you really have to watch Brenna, Korrin, and Erica play to understand what they bring to the court.

“Their eyes are unbelievable,” Shari Campbell said. “Unless you are here at a match or in practice, there are things that you don’t see. The three of them are capable of things that nobody else really knows or expects. They make phenomenal, crazy play happen.”

Selfridge, who is in her first year with Clarion, said what she notices is that her, Brenna, and Korrin, always seem to know what the other is thinking.

“We are always on the same page in the gym,” Selfridge said.

Korrin believes having two additional children of coaches on the court in addition to her helps in a variety of ways.

“I think it makes it a little easier,” Korrin Burns said. “Our IQ is high. We have all been around the game so long. We have such court awareness. That is so rare, and I think that is why this team is so special.”

According to Jodi Burns, who also has had three older daughters – Olivia, Ellie, and Karly (Burns) Long go into coaching – said what she sees from the stands is the ability for Brenna, Korrin, and Erica to see things other players might not.

“When you have three coaches’ daughters, the IQ has to be really high,” Jodi Burns said. “They are coaches on the floor in some ways. They know what to do on their own. They know they can always get better, but they also know where to place the ball and what to say to each other. They know they have the skill to perform, and I think that makes them loose and comfortable.”

Korrin said all three of the players are leaders on the court.

“There have been multiple situations where Brenna, Erica, and I are asked by our teammates what they are doing wrong,” Korrin Burns said. “We can give a little bit of advice. I can’t guarantee it is going to be right, but we can try because we have a higher volleyball IQ.”

According to Selfridge, one of the advantages of being a coach’s daughter is that the game doesn’t stop at the door of the gym.

“When you are a coach’s kid, you just know the game so much,” Selfridge said. “You don’t just play on the court, you go home and talk about it. Your whole life is around the game.”

Shari Campbell said what she sees in the gym every day is Brenna, Korrin, and Erica being more than just teammates.

“They are a role model for everybody else,” Shari Campbell said. “If you were to walk into my gym right now, my young kids are playing defense on the other side of the net and are playing defense tough and digging Erica, Korrin, and Aryana (Girvan) because it’s just expected. They see the defense and the mindset, and they see what these three are doing. So, you know, they’re really leaving the place better than they found it this year.”

Selfridge said one of the things she immediately noticed when she came to Clarion was the court sense the team had.

“I felt like this team had more court sense,” Selfridge said. “That was something really nice to walk into. They were more hi-level.”

Selfridge said watching film together and talking about the game has made the entire team better.

“In New York, we watched film ourselves but not a team other than maybe a couple of times,” Selfridge said. “Here we watch every game, and it is a better way to connect. You see your mistakes, and you try to eliminate them for the next game. Since we all watch it together, I think it brings us closer together, and you see us play together as a team in our happy place. We are all so happy.”

PIAA Football Semifinals Preview Hub
District 9 and District 10 Football Live Scoreboard – Week 11 2020
This website or its third-party tools process personal data.In case of sale of your personal information, you may opt out by using the link Do not sell my personal information.
×
Manage consent