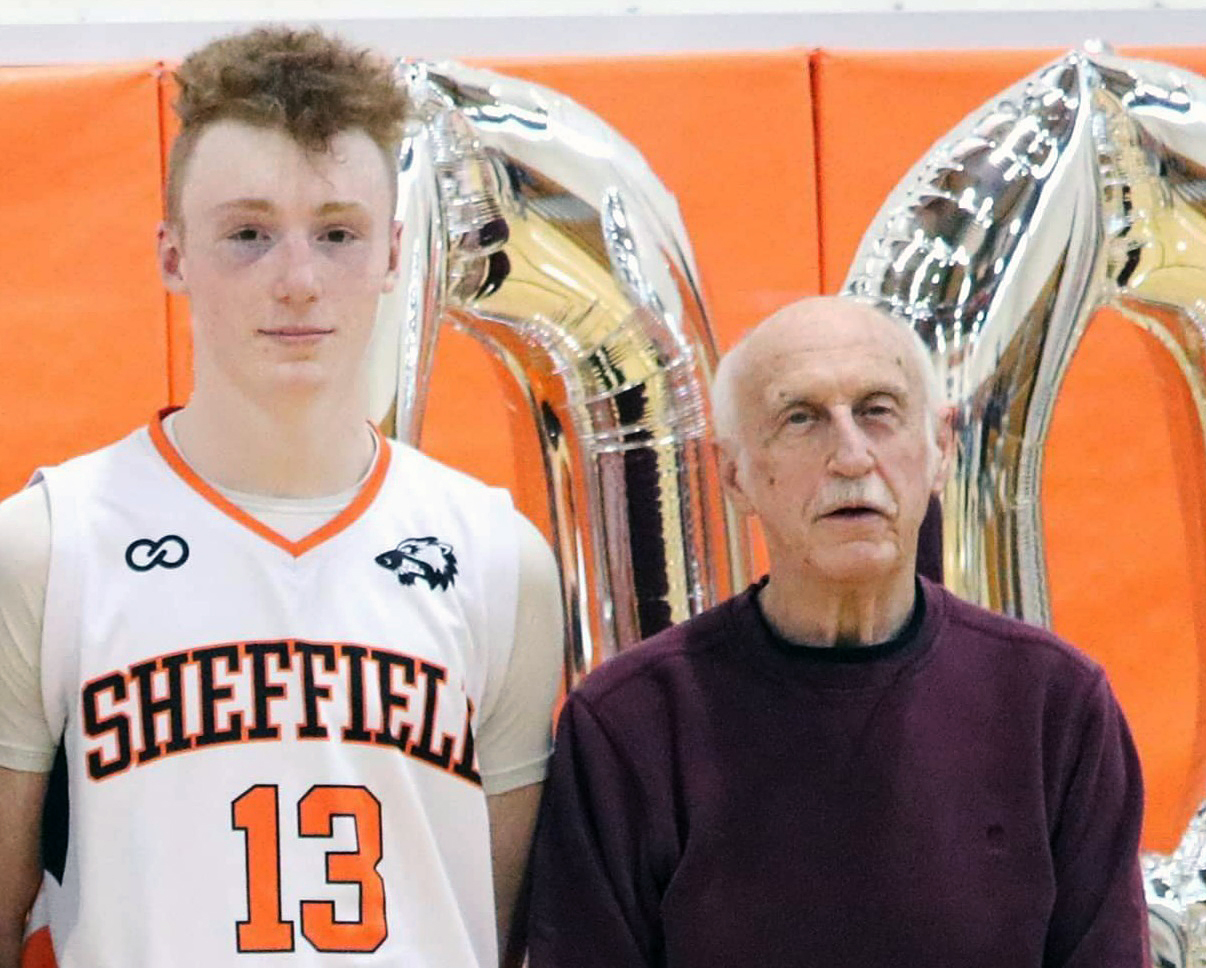 SHEFFIELD, Pa. – When Tyler Hepinger stepped off the court for the final time at the end of Sheffield’s basketball season, he did so as the program’s second all-time leading scorer. One of the men he passed on that list took a special interest in tracking Hepinger’s climb. Not just because he was on the list, but also because he is Hepinger’s grandfather.

George Petruney last suited up for the Wolverines in 1962, and, much like Hepinger, exited the floor for the final time as one of Sheffield’s most prolific scorers. Petruney finished his career with 1,137 points, Hepinger with 1,182. Petruney’s point total was also second in school history at the time and is now fourth.

That shared scoring is just one of the ways basketball has brought them together.

“He’s one of those talkers and every time I go to his house we’re talking about basketball,” Hepinger said. “And, honestly, he’s given me some really good pointers.”

Though his playing days are over, Petruny still loves the game and was proud to see his grandson earn a place among the Wolverines all-time greats.

“Naturally, we’re all proud of him and it’ll be pretty hard to break his record in the near future,” Petruney said.

It was somewhat ironic that Hepinger reached the 1,000 point milestone with a 3-point shot, something that wasn’t available to Petruny in the early 1960s.

“You have to have better talent to shoot that 3-point shot,” Petruney said. “Back in our day you very rarely ever shot a long shot, you were trying to work it in.”

Coming into the season, Hepinger wasn’t really looking at passing Petruny. But that changed once he reached the 1,000 point mark.

“The thought of passing my grandpa came up after I hit 1,000,” Hepinger said. “After that was when I really set the goal. Trying to be the second scorer for Sheffield means I beat my grandpa.”

Often, when current players reach these scoring milestones the game is stopped so the moment can be acknowledged. That’s not something that happened when Petruny played.

“Truthfully, you never knew when you made the 1,000 point,” Petruney said. “They never gave you the ball, they never stopped the game. Almost all kids kept their own (stats). Yeah, but nothing was really brought up that year, it was never mentioned in the paper, or nothing.”

While the looming specter of the COVID-19 pandemic meant a cloud of uncertainty for every player heading into the 2020-21 season, Hepinger’s season was also threatened by a car accident in late summer.

“It was all up in the air,” Hepinger said. “I was honestly personally worried about missing the season. And I got down because everyone had just started their preseason workouts and everything and I was still braced up and I couldn’t do any of that yet. I missed probably two months of the preseason workouts and then I finally came back and got into it.”

Just as teams were gearing up to start play, the season was paused” due to the pandemic. Then the Wolverines had to endure another two-week pause due to COVID protocols. Once they got going, Sheffield had one of its best seasons in recent memory and advanced to the District 9 playoffs.

“We set that goal at the beginning of the season that we wanted to be a playoff team this year,” Hepinger said. “It was an amazing feeling that we are able to show off our hard work and were able to get it. Especially being my senior year, it was really nice to end on making the playoffs.

Hepinger will finish his high school career Sunday when he takes the floor for the All-Star Basketball Game presented by D9and10Sports and the Clarion County YMCA.

Though any points he scores Sunday won’t be added to his total, Hepinger’s name will join Petruney’s on the banner that hangs in the Ralph Santo Gymnasium at Sheffield High School. The magnitude of what that means hasn’t fully sunk in yet for Hepinger, but he knows it will be something he’ll tell his grandchildren about.

“It’s gonna be a great story to tell, that I was able to pass my grandpa,” Hepinger said. “I know it meant a lot to him.”