A Bond Born by Basketball 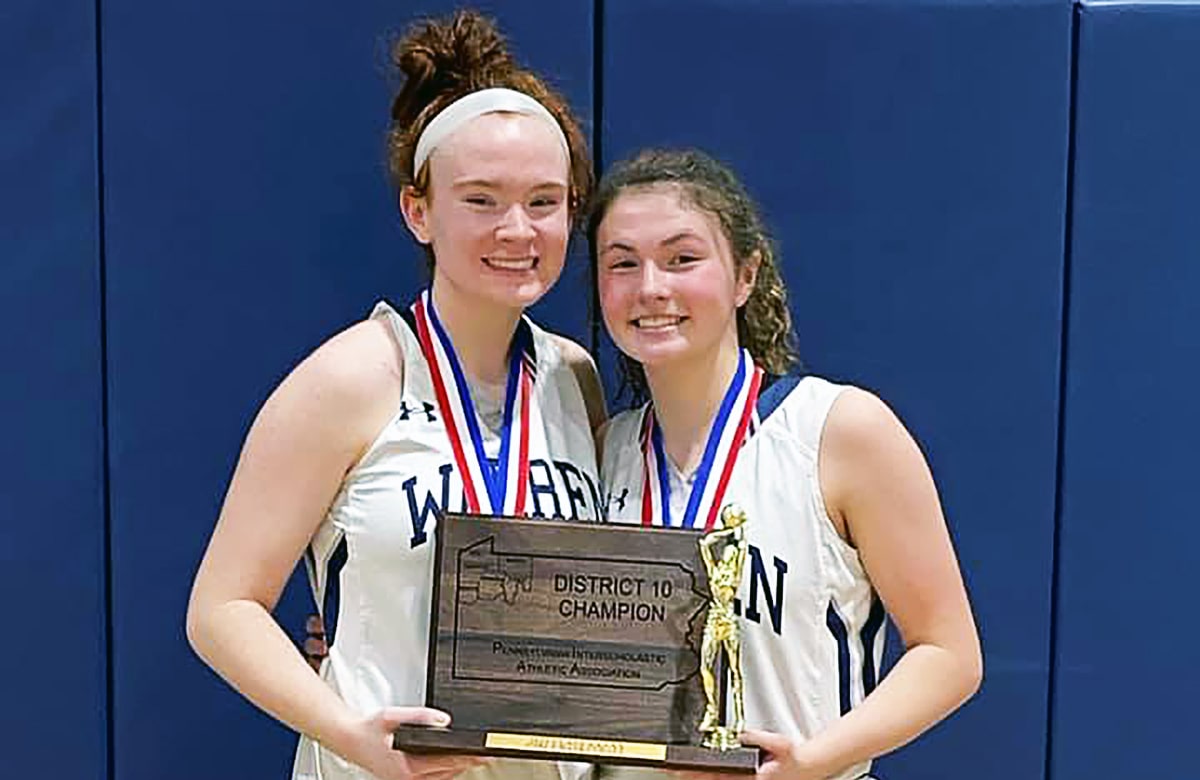 WARREN, Pa. – The first pages in the final chapter of a story that began more than a decade ago were written at Warren Area High School Friday and Saturday night.

The start of the 2021-22 Warren Lady Dragons basketball season also marked the first games in the final season of two players who have become synonymous with both the program and each other, over the last three years.

Seniors Riley Childress and Emma Ruhlman began the final season of their storied careers, a journey that began for them 13 years ago.

“I think we met on the basketball court,” Childress said.

“(In) probably kindergarten,” Ruhlman said. “We kind of started at like the Y league and then we have been on the same team ever since.”

That meeting led to an instant friendship and a connection that has propelled the two to become some of the most decorated players in program history. It certainly helped that they shared many of the same goals.

“I feel like when we were younger we weren’t super serious about (basketball), but as we got older it really became ‘Emma and Riley’ and we both want to play at the next level.”

Though the “next level” was still years in the future, the duo started putting people on notice in junior high that they were going to be a force to be reckoned with during their high school careers.

“That was like our claim to fame in middle school that we went 21-0 in eighth grade. We thought that was the coolest,” Ruhlman said.

“We wanted to challenge the boys’ team, 5-on-5, but we were never allowed,” Childress added.

“Even from a young age, we were very competitive and kind of tag along with each other in that aspect,” Ruhlman said.

Though both said there’s now mutual respect between the boys’ and girls’ teams at WAHS, the open challenge still stands to anyone who wants to question whether the girls are the real deal.

Childress and Ruhlman wasted little time showing the teams in District 10 that they were for real during their freshmen season as they teamed with Margo Loutzenhiser (the program’s all-time leading scorer), Taylor Childress (Riley’s older sister), Alanna Hultberg, Kelsey Stuart, Teagan Paris and others and brought home the program’s second D-10 title.

“So we saw like, mom (Lisa LaVan) and her team like DJ (Hahn) and Paige Wilson, we saw all of them winning and we’ve been around the program enough and we have heard people talk about it,” Ruhlman said. “And it was just something like, ‘Oh my gosh, we want to do this so bad.’ And Margo experienced that freshman year and she wanted it so bad. And we were like, ‘Yeah, we want this too.’ It was just, it was a really good feeling.”

Though they ran into some tougher sledding in the D-10 playoffs as sophomores—falling to eventual champ Grove City in the semis—they still managed to secure a berth in the PIAA state playoffs.

As it turned out, that playoff game—which took place on March 7, 2020—would be one of the last games played that season. By March 12, nearly every professional and college league was shut down and Pennsylvania Gov. Tom Wolf closed schools statewide on March 13 due to the pandemic.

The pair played their junior season under constant threat of a shutdown, either from a program or state level, and even had to wait a few weeks beyond the typical start date to get going due to Wolf’s “pause” on high school athletics.

Still, the Dragons were able to get a full schedule despite the changes and restrictions. And it became a season unlike any other for Childress and Ruhlman.

“We were all worried all the time about who has COVID at school,” Childress said. “It was just always like, ‘When am I gonna get shut down?’ But we never did.”

And that 3-week pause? Ruhlman credits it for helping the Dragons secure their third district title.

“I think that during those three weeks is what won us the District 10 championship,” Ruhlman said. “And why we had such a good season last year was Riley and I and with the help of Kelsey and Tegan, our seniors, you know, sent out workouts to people we all met up at The Hub when it was 19 degrees and shot together like it was just stuff like that, that I think really made that season unique.”

The 2021 District 10 Championship game is quickly becoming the stuff of folklore with Ruhlman knocking down three free throws with no time left to secure the win. And, of course, the first one to start the celebration after the game-winner was Childress.

“I was like trying to calm everyone down,” Childress said. “And as soon as she made the first one I was like yeah, she’s making all these. I was like ‘Guys, I gonna be the first one there,’ and I don’t think I’ve ever run that fast in my life.”

The two shared another moment earlier in the season when Childress dished the assist on Ruhlman’s 1,000th career point. Appropriately, Ruhlman returned the favor Friday night when Childress reached the 1,000-point milestone.

While not taking anything this season for granted, both have committed to play collegiately (Childress at Roberts Wesleyan and Ruhlman at Hillsdale) and though excited for the future both know it will be the first time they won’t be able to lean on each other on the court.

“I always have a guard (now) that I can trust that can catch the ball and score,” Childress said. “In college, everyone can score right, but it’ll just be different it not being Emma.”

“Just the trust and then just the honesty that we can have with each other,” Ruhlman said. “Like in talking about each other. We’re like, ‘Hey, like, you know, see this or Okay, yeah, I’ll see this but you need to see this,’ and stuff like that. We always are bouncing ideas off of each other. And we’re always just leading our team together. And so not having that is going to be different.”

With the 9th annual Warren Girls’ Tip-Off Tournament title in hand, and both players beyond the 1,000-point mark, the team goals for this season remain the top priority.

“Obviously we want to win D-10 and make a run in the state playoffs,” Childress said.

Those goals would also put them in a “class” of their own as it were.

“Margo, her group, they got two titles,” Ruhlman said. “We want to get three. I would really like to be the most decorated class. We’ll make it three.”

The points and the titles and the wins all pale in comparison to what they want their legacy to be when they leave WAHS.

The 2020-21 District 10 champions with some young fans. Photo by Brian Hagberg.

“We want to be role models and I feel like whenever we run our camps and stuff, I just find so much joy in that I know Riley does too,” Ruhlman said. “I just know how much we looked up to like DJ and Margo and all these other players when we were little, and we just hope that the next generation can look up to us and be like, ‘You know what, they’re best friends. I want to be like Emma and Riley when I grow up.”

“Basketball can give you the best of friends and you create friendships that you never thought that you would make,” Childress said. “Thirteen years playing basketball together. It’s a long time.”

A long time indeed, and they’re not done yet.

D9and10Sports.com to Broadcast Youngsville at Eisenhower Wrestling Thursday
Clarion U. to Rename Wrestling Room for Legendary Head Coach Bob Bubb
This website or its third-party tools process personal data.In case of sale of your personal information, you may opt out by using the link Do not sell my personal information.
×
Manage consent