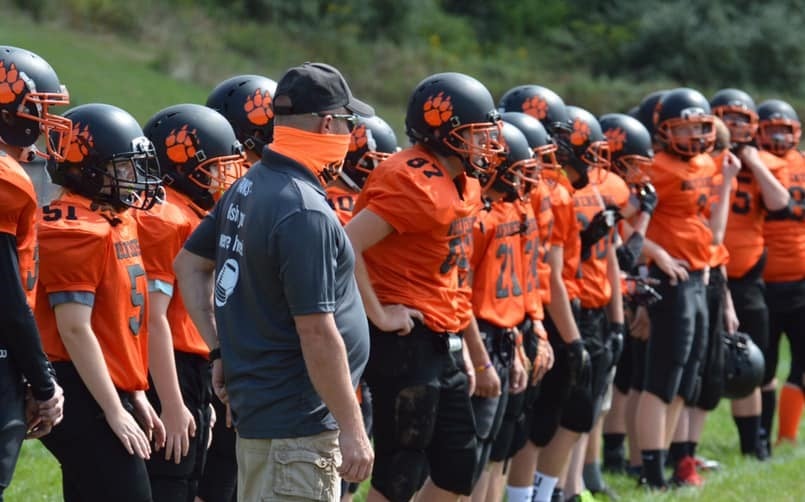 SHEFFIELD, Pa. – Citing low numbers, Sheffield announced it was canceling the remainder of the 2020 varsity and junior varsity football season at the school.

“The 2020-2021 Sheffield Area Middle-High School varsity and junior varsity football program cannot go forward in the season due to safety concerns related to numbers,” a released from the Warren County School District distributed to the media by Sheffield Athletic Director Corey Copley said.

The Wolverines dressed between 22 and 23 players for their season opener against Keystone last week, an 86-0 loss that saw the visitors lead 79-0 at halftime. Sheffield’s numbers were hurt when Abraxas decided not to participate in a cooperative agreement this year because of COVID-19.

“Participation numbers in the program started out low,” the school district release said. “Sheffield is missing its long-time cooperative teammates from Abraxas.

“At the onset of the season, Sheffield thought they would have enough of their own players to complete the season, but unfortunately, that did not happen. Teams often lose players throughout the season due to injury, or simply because players decide to shift to other activities. In Sheffield’s case, they just didn’t have enough players to overcome the loss of players after last week’s game.”

According to the release, an assessment was made following practice Thursday and a decision was made to cancel Friday’s game at Curwensville and the remainder of the season.

“The team was looking at 17 players of various skill, experience, and preparation levels for the next game,” the school district release said. “District football teams fall into the red zone within our procedure at 19 players. At that point, we must assess the safety of the team moving forward. As much as everyone would like to see the students have the opportunity to play, I can’t support knowingly putting our students in an unsafe situation with this number and combination of players.”

The Warren County School District release acknowledged the decision was going to be a disappointment to many.

“I know this decision is disappointing to the players and their coaches that have worked hard,” the release said. “I know it is also disappointing to the cheerleaders and their coaches who have also worked hard. I know this is going to impact the entire school community and the Sheffield community. We are simply out of alternatives at this point in the season.”

The decision currently only affects the 2020 season. The school district will assess its options for 2021 in the coming weeks. In 2017, the Warren County School District closed down the Youngsville football program. Anyone interested in playing football who attends Youngsville can now do so through a co-op with Warren High School.

“We can begin to talk about alternatives and possibilities for next year in the coming weeks,” the release said.