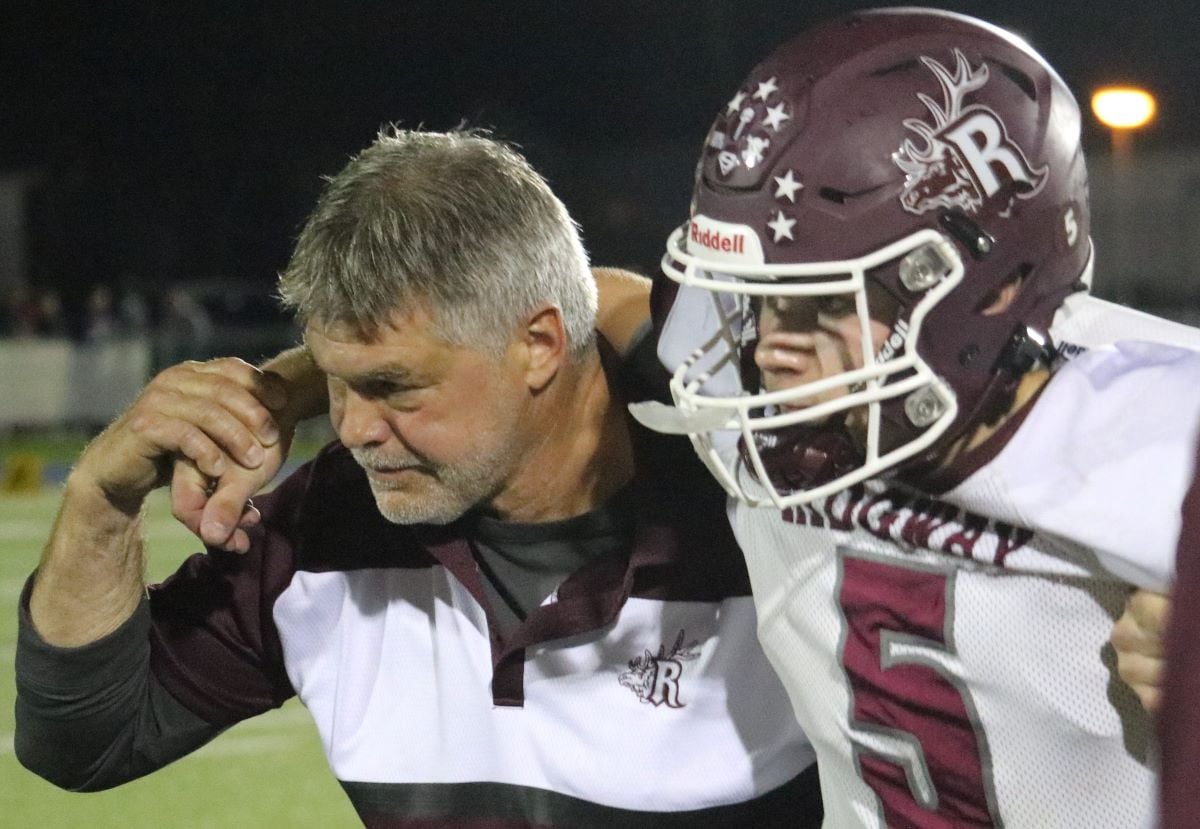 WARREN, Pa. – Chris Marshall was far from a one-man show for the Redbank Valley football team, but Marshall was one of the key parts in the Bulldogs becoming the first District 9 team to reach a PIAA championship game in 29 years.

And it is Marshall’s work on both sides of the football that earn the senior wide receiver/defensive back the 2021 D9and10sports.com Jim Kelly District 9 Football Player of the Year Award powered by the Allegheny Grille in Foxburg. Editor’s note: Jim Kelly’s name is used with the permission of Jim Kelly.

Marshall caught 42 passes for 632 yards and 11 touchdowns while recording 54 tackles from his defensive back position with four interceptions and a fumble recovery. He returned one of those interceptions for a touchdown.

Joining Marshall in being honored with major postseason awards are two of his Redbank Valley coaches.

Coudriet was District 9’s leading passer with 2,942 yards while completing 66.8 percent (217 of 325) of his passes with 26 touchdowns and six interceptions. He also ran for 89 yards on 38 carries and tied for the team lead with six rushing touchdowns.

The 2,942 passing yards were the fourth-most in Pennsylvania among quarterbacks whose stats were reported to MaxPreps.com and the 26 TDs ranked 13th.

Billotte, who just signed to play at NCAA Division I Kent State was a force on the defensive line for a Clearfield defense that ranked second in District 9 allowing 10.7 points per game (54 of the 128 points allowed by the Bison came in a playoff loss to Bedford – they allowed 6.7 ppg to their other 11 opponents) while recording five shutouts.

He recorded 65 tackles, 25 tackles for a loss, and 10 sacks while playing both plays – he was also the starting quarterback.

The Gremlins averaged a District 9-leading 273.5 yards per game on the ground, the 20th best mark in Pennsylvania while having two 1,000-yard rushers (Jayce Anderson and Luke Garing).

In 13 games, Karns City rushed for at least 200 yards 12 times including going over 300 yards five times. The Gremlins season-best was a 428-yard rushing output against Bradford.

Karns City averaged 36.6 points per game, the third most in District 9.

Josh Griffiths is No. 77

Fox burst on the scene with a 282-yard, three-touchdown performance in a Week 1 upset of Union/A-C Valley and never slowed down throwing for 2,568 yards, the seventh-most among quarterbacks in Pennsylvania whose stats were reported to MaxPreps.com and the second-most among freshmen.

Fox also ran for one score on the year.

Gold led Redbank Valley to a 13-2 overall record that included a 13-game win streak and District 9’s first PIAA championship berth in 29 years and just the third all-time for a D9 team.

The Bulldogs, who lost 21-14 to Bishop Guilfoyle in the title game, won their second consecutive District 9 title after not winning one before last season since 1996. All this with a first-year starting quarterback and after losing their starting running back hours prior to their first PIAA playoff games.

A hallmark in the playoffs was Redbank Valley’s ability to handle adversity.

The Bulldogs trailed in four of their five postseason games, including twice by double digits but won three of them, including both games they were down by 14 points in and twice when trailing at halftime, a testament to Gold’s ability to make in-game adjustments.

Kundick was the primary play-caller for a Redbank Valley offense that averaged 36.9 points per game, second in District 9.

Despite starting a first-year quarterback who hadn’t played varsity or junior varsity football and losing his starting running back just hours before the first PIAA playoff game, Kundick’s offense averaged nearly 300 yards per game (294.6) and helped the Bulldogs become just the third team in District 9 history and the first since 1992 to reach a PIAA Championship game.

Jason Kundick is on the right. Photo courtesy of Ronny Geist

Mullins was sensational in all aspects of special teams for the Golden Tide.

Mullins was also strong in the punting game averaging 39.0 yards per punt with six of his 24 punts ending up inside the 20-yard line.

Maybe even more impressive, Mullins wasn’t just a full-time special teamer. He also was a key wide receiver for the Golden Tide finishing second on the team with 47 catches for 627 yards and five touchdowns.

Coudriet threw for a season-high 400 yards in a 35-28 win over Karns City going 25 of 39 with five touchdown passes and no interceptions.

His fifth scoring toss was the most important, as he hit Carter Chadsey from four yards out with just 40 seconds to play to give St. Marys the win, a win that ultimately gave the Dutch the District 9 Football League’s Large School Division title.

Redbank Valley became the first District 9 team to win a PIAA football semifinal game since 1992 and just the third ever when it beats WPIAL champion Bishop Canevin, 23-14, at North Hill High School in the PIAA Class 1A semifinals.

And the Bulldogs did it in memorable fashion.

Trailing 14-0 in the second quarter and being outgained 172 yards to 29, Redbank Valley went to a short passing game and cut the deficit to seven, 14-7, at halftime on a 5-yard Ben Roethlisberger-like run by quarterback Bryson Bain.

Then the play of the season – one of the plays of District 9 history happened just over four minutes into the third quarter.

With Bishop Canevin threatening to go up two scores again with the ball at the Redbank Valley 11-yard line, Chris Marshall stepped in front of a pass at the 2-yard line and went 98 yards to glory to tie the game at 14.

Then, early in the fourth quarter, after another Bishop Canevin turnover – this time a fumble recovered by Brenden Shreckengost – Shreckengost went in from a yard out to give the Bulldogs a 21-14 lead.

Joe Mansfield put the finishing touches on the win when he recorded a safety with just over five minutes to play.

Ashton Kahle (6) and his Redbank Valley teammates celebrate at the end of the game. Photo by Jared Bakaysa

Salberg is the very definition of selfless.

The volunteer strength and conditioning coach for the Elkers the last four years, he has helped multiple teams in Ridgway get stronger and better including the boys’ basketball team.

Ridgway head coach Mark Heindl calls him a complete godsend not only on the field but off it as well.

“Without him, our strength and conditioning wouldn’t be where it is right now,” Heindl said.

According to Heindl, Salberg uses his own money for a lot of the work.

“That says a lot about him,” Heindl said. “And he does it for all sports. He has a heart of gold. He does what he does for the kids, and doesn’t want any recognition for it.”

Region All-Stars Named in District 10 Girls’ Soccer
2021 Jim Kelly D9and10Sports District 10 Football Awards Powered by Allegheny Grille of Foxburg Chosen; All-District Team Named
We use cookies on our website to give you the most relevant experience by remembering your preferences and repeat visits. By clicking “Accept All”, you consent to the use of ALL the cookies. However, you may visit "Cookie Settings" to provide a controlled consent.
Cookie SettingsAccept All
Manage consent