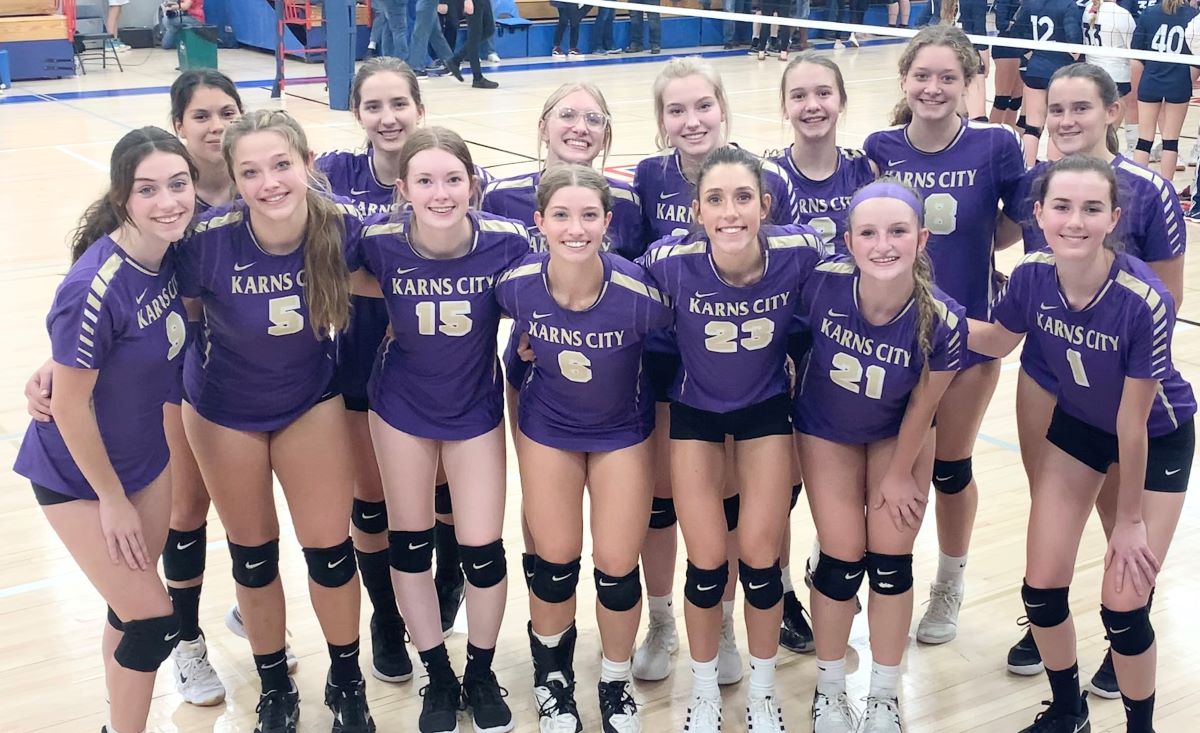 Ava and Ashley Fox played big roles in the comeback with both players recording a pair of kills.

Ava Fox had a pair of kills early in the comeback getting the Lady Gremlins within one, 21-20 with a kill and then tying things up at 22 with another kill.

A reception error by Karns City, though, gave Kane a 24-23 lead.

That is when Ashley Fox stepped up with a tip over the net to tie things at 24.

Ashley Fox kept the Lady Gremlins alive after a Kane kill off the top of the net had put the Lady Wolves back in front, 25-24. It was a tip/block by Ashley Fox that tied things back up at 25.

Amber Mauer then gave Karns City a 26-25 lead with a kill before Rosie Carden’s attack was passed into the net by Kane giving the Lady Gremlins a commanding 2-0 lead that quickly turned into a sweep.

Johns also added 15 set assists, six digs, a block, and an ace and teamed with Carden to run the offense. Carden had 16 set assists, eight kills, and 16 digs.

Mauer added three kills and eight digs for the Lady Gremlins with Jessica Dunn contributing five digs.
Kane was paced by six kills from Mackenzie Blankenship and four each from Cora Jekielek and Maya Smith.

BROOKVILLE, Pa. – Securing a spot in Tuesday’s semifinal matchup with No. 2 seed and defending champion Redbank Valley, No. 3 seed Brookville needed four sets to beat visiting Punxsutawney in the first round of the D9 Class 2A playoffs.

After Punxsutawney won the second set, the Lady Raiders finished things off, breaking a 21-21 tie in the third with a 4-0 run to go up 2-1. Then they put away the visitors by jumping out to a 20-9 lead in the fourth.

Benedict wasn’t the only record-setter for Sharpsville, as Lauren Kos became the school’s all-time leading assists leader with 1,634 after recoding 29 set assists to go with eight kills.

Both records were first reported by the Sharon Herald.

Sharpsville will take on third-seeded Corry in the semifinals.

Kayla Forsythe and Cadence Jones combined for 41 kills for North East, according to the Meadville Tribune.

Sadie Thomas did her best to help Maplewood to the elusive victory finishing with 29 kills while Trista Robinson and Avery Brunot each added nine kills.

North East will face top-seeded Harbor Creek in the semifinals.

Oct. 27, 2021 D9 Soccer Playoffs: Clearfield, Karns City Girls Take Care of Business; ECC Triumphs; Clearfield Boys Blank DuBois
Oct. 28, 2021 D9/D10 Volleyball and Soccer Playoff Schedule
We use cookies on our website to give you the most relevant experience by remembering your preferences and repeat visits. By clicking “Accept All”, you consent to the use of ALL the cookies. However, you may visit "Cookie Settings" to provide a controlled consent.
Cookie SettingsAccept All
Manage consent