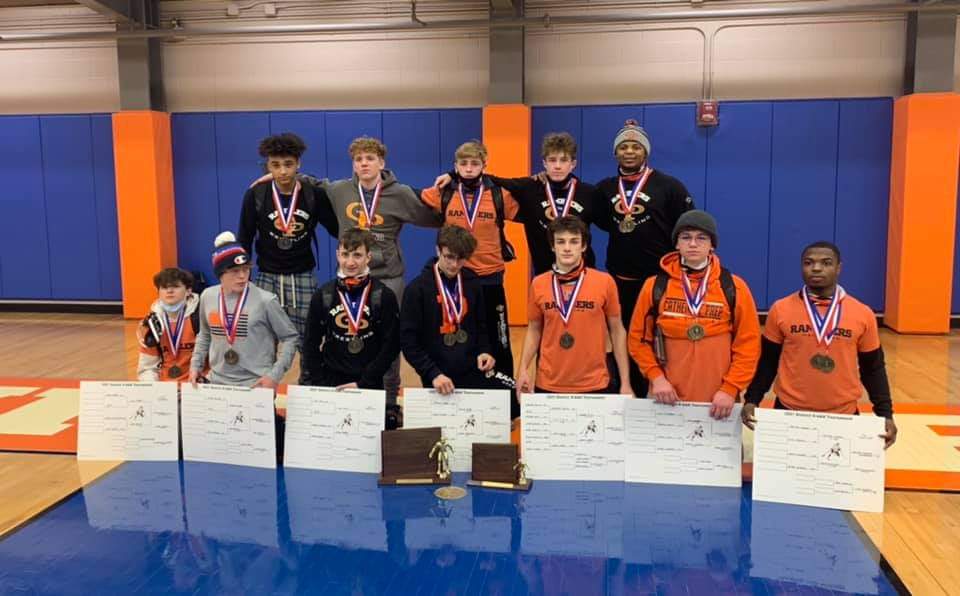 With the 2021-2022 wrestling season just underway, now seems as good a time as any to try and get a sense of those grapplers who will make their presence known in the large school division of District 10.

What names will the fans be hearing over the course of the next several months? Who might need reckoned with when the postseason rolls around? Who could possibly find themselves staking a claim to a podium spot in Hershey come March 2022? There are guides that can be used for assistance, in this case the preseason state and NW Region (District 4/6/9/10) rankings released last week just prior to the first day of competition by PA Power Wrestling (PAPW).

Any effort such as this is, by its very nature, an inexact science; some wrestlers will be changing weight classes, some may opt-ou for various reasons, some may not compete due to injury. Please keep that in mind while considering what follows. (All records are from the truncated 2021 season).

120 Pounds
Junior Logan Sallott (9-4) of McDowell made his way into the state tournament as a 106-pounder last season after placing as the district and regional runner-up. He was also a regional qualifier as a freshman. Sallot is ranked 14th in Pennsylvania and third regionally.

126 Pounds
Jacob Van Dee (17-1), a Cathedral Prep senior, is the returning state champion at 113 pounds, a title he claimed after winning both districts and regionals. He was district and regional champ as a sophomore, a season he capped with a runner-up finish in Hershey. Van Dee was also a state qualifier as a freshman. He starts the 2021-2022 season ranked second in Pennsylvania and first in the region.

138 Pounds
Hudson Spires, a freshman at General McLane, is ranked seventh regionally, while Cathedral Prep sophomore Jaman Curlett comes in at eighth. Both will be embarking upon their first varsity seasons.

145 Pounds
Cathedral Prep’s Steffan Lynch (12-4) is a two-time regional qualifier, doing so last season at this weight after earning district runner-up status. Lynch was a district champ as a freshman. PAPW has the junior eighth in the state and third in the NW Region. Senior Logan Carrick (10-3) was the 2021 district champion at 138 pounds. He also finished his sophomore season as a regional qualifier, advancing after placing second at districts. The McDowell grappler is 13th in the state and fourth regionally. Kyle Cousins (18-8) took third last year at districts as a 132-pounder. A General McLane junior, Cousins is ranked 25th statewide and eighth in the region.

152 Pounds
Three-time regional qualifier Kaeman Smith (11-3), a Cathedral Prep senior, is ranked 25th in Pennsylvania and fifth regionally. Last season he was district champ at 132 pounds and took fourth at the regional tournament. He was a district champ and regional runner-up as a sophomore, earning a trip to Hershey. Smith also qualified for regionals as a freshman, a season in which he was district runner-up.

160 Pounds
McDowell’s Caleb Butterfield (6-2), a junior, was third in the district last year at 132 pounds, going on to finish fourth at regionals. He was a district runner-up and regional qualifier as a freshman. Butterfield is ranked 22nd in the state and fifth in the region. Junior Owen Shetler (7-8) advanced to regionals at 172 pounds in 2021 by way of a runner-up finish at districts. Regionally he is currently ranked sixth in the NW.

172 Pounds
Magnus Lloyd (19-5) was the 172-pound district champion in 2021, his first season as a varsity wrestler. The General McLane sophomore begins his second varsity campaign ranked eighth in the state and second in the region. Right behind Lloyd at ninth in the state (third regionally), is Cathedral Prep senior Kelyn Blossey (10-7). He was district runner-up at 160 pounds in 2021 and a district champion in the two prior seasons. Meadville sophomore Ty Tidball (11-6) is ranked eighth in the region.

189 Pounds
Griffin Buzzell (12-2), a Meadville senior, was the 189-pound district titlist in 2021. He placed first in the district and second at regionals in 2020, advancing to the state tournament. Buzzell was also a regional qualifier his freshman year. He enters his final year of scholastic competition seventh in the state and first regionally.

215 Pounds
Two-time regional qualifier Rhoan Woodrow is currently ranked 21st in Pennsylvania and fifth in the NW. The Meadville senior was district champion at 189 pounds last year. He qualified for states as a sophomore after winning districts and placing second at regionals. Woodrow also qualified for regionals as a freshman.

285 Pounds
Junior Wilson Spires (17-8) of General McLane was district runner-up last season at this weight and then placed fourth at regionals. He also advanced to regionals as a freshman. Spires is presently ranked 19th in the state and third in the region. Cathedral Prep senior Caden Pustalek enters his first varsity season ranked seventh regionally.

D9and10sports.com to Broadcast Bradford at Warren Boys, N. Clarion at Clarion Girls Basketball Tuesday
2021-2022 District 9 Class 3A Wrestling: Who to Know Powered by Luton’s Plumbing Heating & AC
We use cookies on our website to give you the most relevant experience by remembering your preferences and repeat visits. By clicking “Accept All”, you consent to the use of ALL the cookies. However, you may visit "Cookie Settings" to provide a controlled consent.
Cookie SettingsAccept All
Manage consent