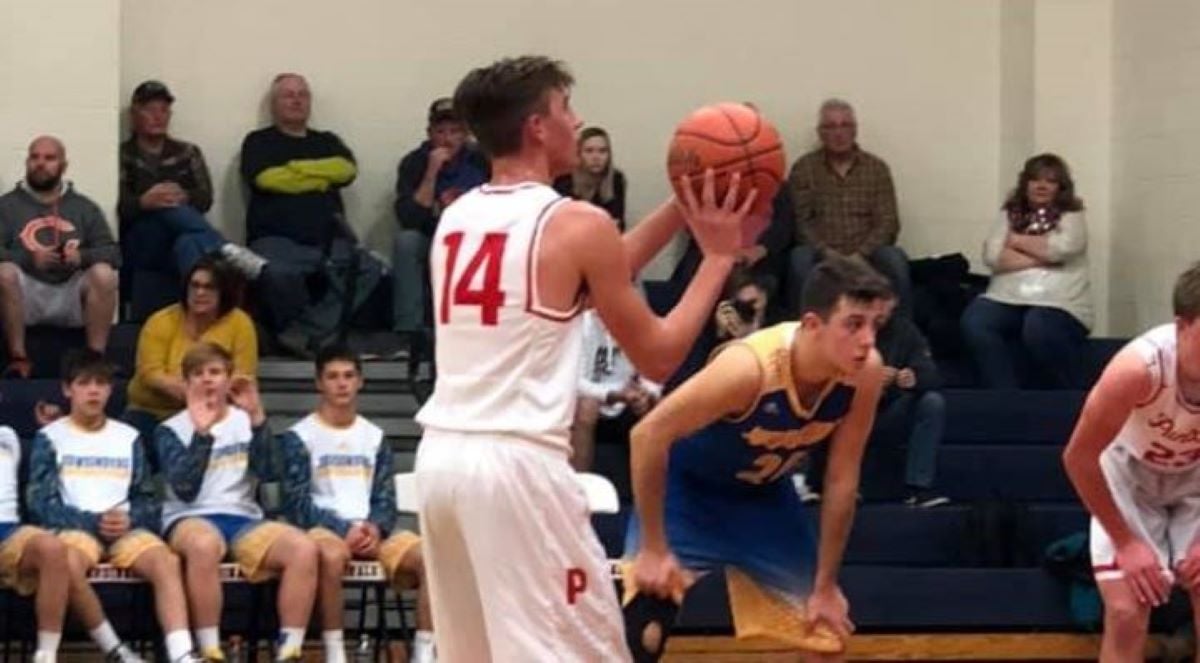 Top returning players: This is a tough one to narrow to a few guys. We have an excellent core group of guys coming back and a few new guys who I expect to contribute greatly. If i had to narrow it down to a few guys to keep an eye on it would be:
– Nick Humble- senior, shooting guard, average 7.5 ppg. last season
– Gabe Kengersky- Junior, Point guard, didn’t see a ton of varsity last season but high expectations,
– Andrew Young- Senior, shooting guard, average 5 ppg. and 3 steals per game last season
– Kyle Nesbitt- Junior, Shooting guard, not much varsity time last season but high IQ and skilled
– Ethan Presloid, Senior, small forward, 7 ppg. and 5 rbg. last season

Key newcomers: We have a few guys that i’m excited to have this season:
– Graham Lott, Senior, Small forward, took last season off. Back for his senior year. Bigger body that is going to be able to help us on the boards, but mostly Graham’s ability to lead is exceptional. He is both a vocal leader and with his actions. Coming off a successful soccer season as a team captain this guy is a gamer, a winner. He works hard everyday and expects his teammates to do the same. He holds very high standards and expectations.
– Noah Weaver, Freshman, Point guard, was the only ninth grade kid brought up to the JV/Varsity level. Noah has a natural “feel” to the game. His man-to-man defense is great and his fearlessness on the floor allows him to put in his fair share of points. He is young and still has a lot of learning and development, but our expectations with this kid are extremely high. I can see him developing into a scholarship type athlete by his junior/senior season.
-Jaugar Mcdivitt, junior, shooting guard, This guy is someone we would consider “slept on”. To the eye he is not the most raw talented kid that I’ve seen, but his intangibles are off the charts. Jag was another key to the soccer team’s success. His speed and quick feet allow him to defend any guard, and his motor never stops. He can defend baseline to baseline all game long. He isn’t one that you’d expect to see lighting up the stat board, but he brings great value to the game.

Keys to the season: There are going to be many keys to seeing success this season but a few stand out more than others. Our leadership staff. This year we have a core group of guys that make up our leadership council, currently these players are Nick Humble, Graham Lott, Ethan Presloid, Andrew Young, and Gabe Kengersky. This group has a huge impact on practices, decision making, overall team motivation, and mostly team accountability. They are going to have huge responsibility in the overall success. From more of a statistical, player specific angle:

Nick Humble is a solid offensive threat. We are going to be looking for him to generate points for us on a consistent basis. One of the things we are going to need to see from Nick is the ability to play “within the flow.” This system is a little different then what these guys are used to. His ability to score when the opportunity arises but also to generate attention and create easy shots for his teammates will be huge.

Graham and Ethan are going to need to step up to control the Paint. We aren’t a huge team, but are physical and play hard. We are going to rely on these two to be able to defend any centers or other big bodies that we come across this year. These two are going to need to control the rebound game and be our “glue guys”. A few other guys that are really important factors for this team to see success this year are Donnie Neese (Jr), Josh Shoemaker(Jr), Aramy Ferrent(Jr), and Zach Dinger(So). These four guys are players that we see fluctuating in time and role.

They all bring different strengths to the table, and based on the opponent and what we need is going to be the deciding factor on their contribution that night. Donnie is a guy that I definitely don’t want to leave out of the conversation for sure. He is very versatile with a taller frame body, but still the ability to shoot and handle the basketball. He can also contribute on the inside presence as well. You hear a lot about the guys that are scoring the ball and “stuffing the stats” but I feel that these four guys play an absolutely vital role. As a player, I’ve had roles that they are expected to have this season, and I feel it is much more difficult both physically and mentally to be willing and able to flourish in that setting. These are all guys who truly feel they have the ability to give us double-digit points or rebound any given night. When it’s their time to go they are going to need to be ready to roll for us to have consistent success.

Things your team was doing during the COVID-19 pause of winter sports: Obviously we, as many, were devastated to hear the news of the shutdown. These guys have been working their tails off for weeks on end with a mask on the whole time. They have done everything we’ve asked of them to take proper precautions, and they deserve to play. But, one of our team focuses this season are uncontrollables.

We try to get the guys to understand that in basketball and in life, there are many situations that you simply cannot control and in those situations the only thing to do is to control what you can with yourself and your decisions and let the rest play itself out. I heard a quote from Elk County Catholic coach Aaron Straub that I shared with our guys too, and we’ve been trying to keep this in mind as well. I have an insane amount of respect for Coach Straub and the entire ECC program they have built and with his resume, and character, if he gives advice, you listen! He said “it is better to be prepared and not play, then to not be prepared and have to play.” Very simple, but very true.

With those few thoughts as a focus during our break we have also been trying to stay proactive and keep guys’ minds on the game. Our head junior varsity coach, Kyle Braun, has been exceptional with his studies and knowledge with speed and agility training, as well as vertical leap and deceleration training. He has been doing online Zoom sessions with the guys a couple times a week to keep them active and working. We also have had our leadership council hosting a zoom meeting and watching film together as a group. Aside from that, we try to stay in contact with all the guys a couple times a week and give as many motivational reminders to keep themselves in shape and ready to go. Upon return, we plan to pick up right where we left off and hit it full speed ahead. Just because we had to take a break doesn’t mean we are done. We have the same goal now as we did when we started, and that is simply to be the best people and players that we can be every single day.