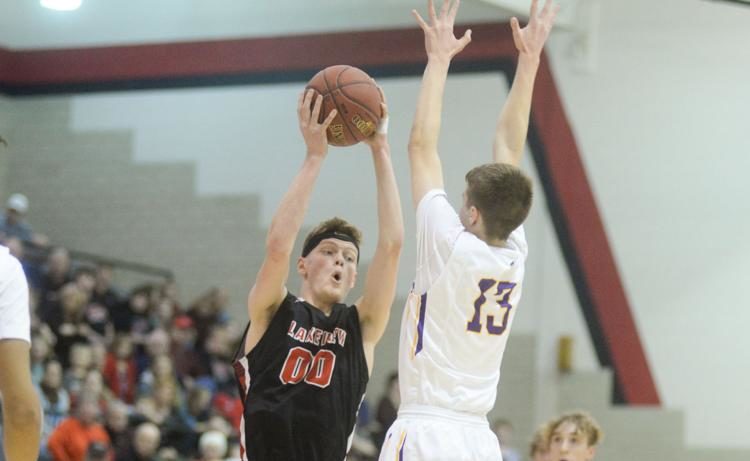 Key newcomers: Isaac Lightcap- SG- Senior: Isaac gave us some great minutes throughout last season, but notably his shooting performance in the D10 championship. He has spent time in the offseason developing his game and we look for him to defend, score and be a leader on this team

Gavin Granthm- SG- Junior: Has played in our system for two years and understands what we want to do both offensively and defensively. Has the ability to knock down shots from the perimeter and create for others.

Cologano Wilkins- G- Junior: This is one of the hardest working guys in our gym. He has completely bought into our system and is very coachable. He will step up and take on a bigger role this season. He will be one of our best athletes on the floor this season.

Lane Smith- PF/C- Junior: Lane gave use big minutes off the bench late last season and has developed his game to become a go to guy this season. He crashes the glass and works hard to get himself in the right spot on the floor to make things happen. We will look for him to be an inside threat.

Ted Shillito- PF/C- Junior: Ted is a guy who can make things happen when he’s on the floor. Has soft hands and finishes well around the rim. He has developed a good 15 footer offensively and is one of our tougher players on both sides of the ball

Cameron Pence- SG/SF- Sophomore: Cameron has spent a ton of time in the gym this offseason and will be a fantastic addition in our rotation. He has the ability to stick it from the outside and finishes at the rim. We will look for him to create for us on the offensive end

Noah Miller- G- Sophomore, Deven Olson- SF/PF- Sophomore   Both these guys played a lot of JV basketball last season, spent time developing their game this offseason and we will look for continued growth throughout this season.

Keys to the season: One of the biggest things we stress in our program is defense. We have to be able to sit down and get stops. This is something we work on day in and day out. If our guys don’t want to defend, they won’t play. On the offensive side of the ball will look to push in transition. We must have a good inside out balance and not fall in the love with the 3 ball. We will look for everyone to crash the offensive boards to create extra possessions. Continuing to develop our zone offense to be effective will be key to competing in all games this season. Because of COVID we didn’t have a ton of time in the gym, so we will have to evaluate where guys will fit in and what our rotations will be.

Things your team is doing during the COVID-19 pause of winter sports: This is a very difficult time for all communities, families, schools and teams. We have been working with our guys when state mandates allowed us to be in the gym. With the time we had in the gym, our guys were focused and we could see the drive/determination they had to get better in whatever time we had in the gym. We could see those guys who were stepping up as leaders in a positive manner. As a coaching staff we were pleased with what we had accomplished before we shut down. We stay connected with our guys via a team app and stressed the importance of keeping a ball in their hand and staying in shape for when we return. When we return I am expecting we will start where we left off. Coming off the first ever D10 championship in school history, these guys have bought into our system and know what it takes to make another run. We are very excited to be back in the gym with our basketball family!