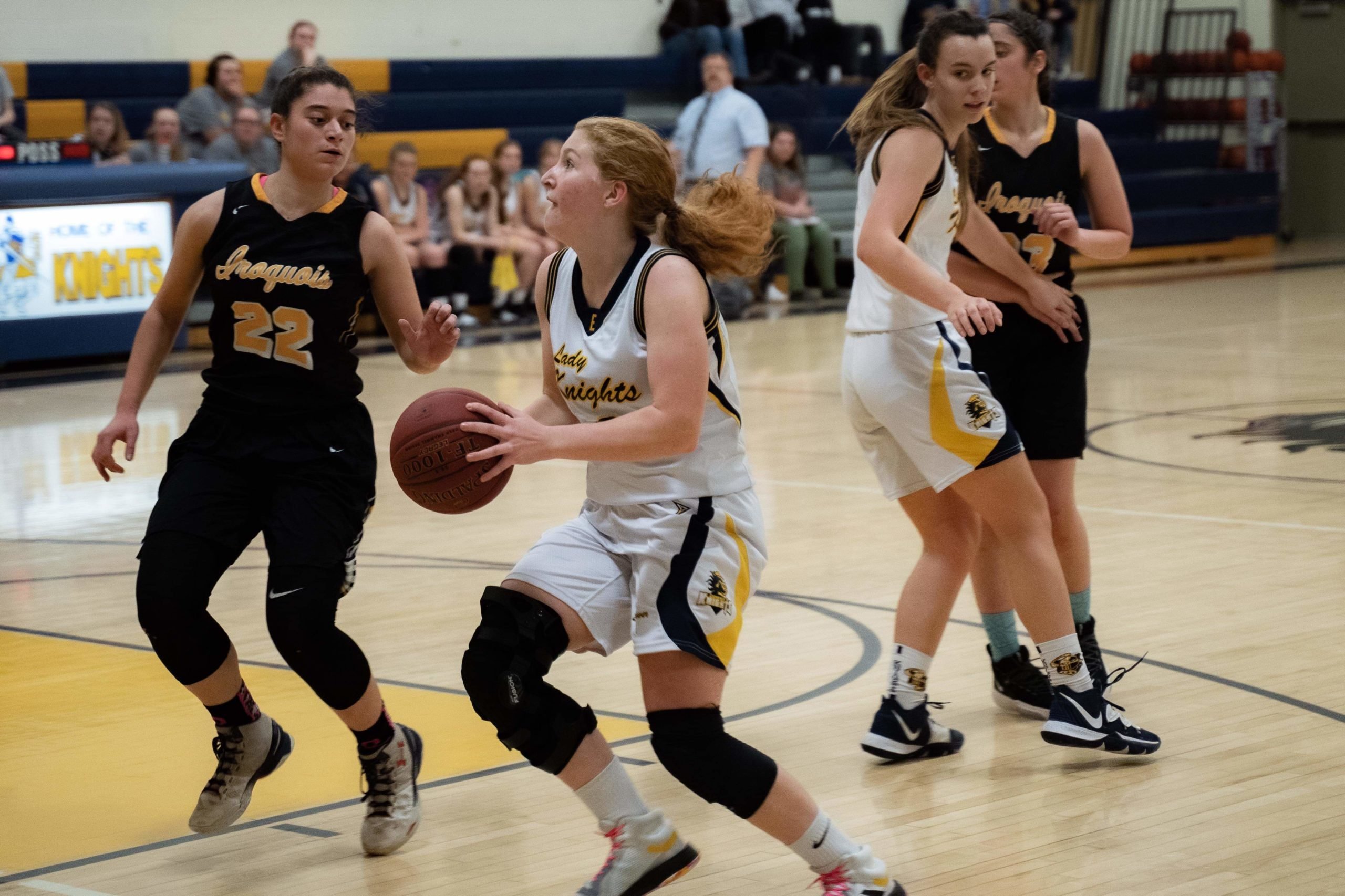 Top players lost:  Graduation:  Emiley Wheeler who is know playing basketball at Penn State-DuBois. She finished her career as the second all-time leading scorer in Eisenhower Girls’ Basketball history with 885 points (second to Elisha Jones who has 1824 points).

Key newcomers: Senior – Ellie Strausser – wing. She has played some very good defense in the past while playing some minutes.

Senior – Brittany Smith – post. She is a tough girl who does not get pushed around when playing in the post.

Senior – Kayla Greene – wing. She is playing again after sitting out her sophomore and junior seasons.

Sophomore – Lilly Smyth – small forward. She is a solid defender and a good shooter.

Sophomore – Mackenzie Dunn – post.  She gives you everything she has on the court and hustles while doing the little things that few other want to do (getting on the floor for loose balls, mixing it up inside with the bigger posts, and guarding bigger players.)

Keys to the season: One of our keys will be in replacing the scoring, rebounding, and defense that we lost with the graduation of Emiley Wheeler.  I believe that we will be replacing those aspects not by one player but by “committee”. Our biggest key as a team will be for us to become a better defensive team. We really struggled with our team defense last season and without any summer program and a very limited fall of open gyms, we really have not had much time to work on it.  Another key will be foul shooting. Last season we really struggled at the foul line (Team was 121 of 283 = 43%).  With no summer program due to COVID, we are hoping that the girls got plenty of foul shooting in at home on their own. Another key will be how quickly we can come together as a team.  We were able to get in the first seven days of practice before corona virus exposure shut down our team practices.  We have not practiced since November 28. We are a small (only 13 girls) and inexperienced team (6 sophomores and 1 freshman, 1 junior -who is playing basketball for only the second year ever, and 1 senior who has not played since her freshman year).

Things your team is doing during the COVID-19 pause of winter sports: Our coaching staff is offering non-mandatory zoom workouts three days a week.  These are 30-45 minutes of ball handling and core workouts.  As a team we were in great shape when practices started on November 20 because many  of the girls were on the soccer team and Coach Elmquist had done a nice  job of conditioning for her season.  However with us not being able to  practice since November 28 due to COVID-19, we asked the girls to do some running at home on their own, shoot as much as possible on their own, and  log in and participate on our voluntary zoom workouts. Like all other teams in Pennsylvania we will find out how much work the girls put in on their own when we re-start practices on January 4 after the Governor’s “pause”.